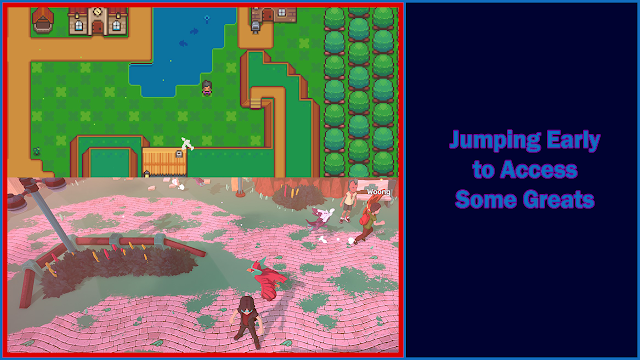 In the last few years I’ve started to branch out some more with games, rather than sticking with the few series that I know. Most of that has been with the Switch, but I have been hunting for things in other places, too.

Steam would be a good place to go, with sales and cheaper prices overall than what you’d find on a console store, and it was something of a surprise when I pretty much stumbled upon one of the two I’ll be talking about here. The other one I had seen before and had got interest in, but had fallen off my radar pretty quickly. The day after buying that first game, however, I found it again.

That first game would be Littlewood, the RPG game where there’s no battles to be had, with the world already having been saved. By you. The hero. Who has lost their memory. The task of this RPG is to gain back the memories you lost by building up the town and attracting more people to it.

You’ll build relationships with those people, which levels up your relationship meter with each one, and only through hitting those levels will you unlock small cutscenes of townsfolk talking to each other and learning of events of the past. The dialogue is a big part of this, then, and the writing is on point. There’s charm to it, with some fun interaction to be had with all.

You’ll be working to build the town, gathering materials to use and money to spend, and the game teaches the basics of everything it throws at you, with new things always being introduced to add to the town. It feels pretty similar to Harvest Moon and Rune Factory in that it’s an open-ended game about exploring new places to build relationships and increase the things available for you to build within the town. 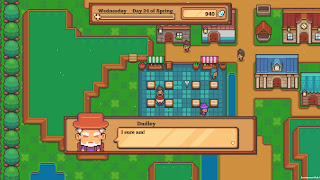 The game is a bit restrictive in that area, as while you can place anything wherever you want, everything has to be south facing. Even ramps up to higher ground. As such, to get the most out of the area, it feels as though any high areas you want to place should be put to the north. Other than that, designing the town is a delightful thing to be doing, with changes easy to make with the always accessible build mode.

Onto the second game, which you’ll know about if you’re following me on Twitter, as I had given a small review of it on there. That game is Temtem, the monster catching RPG MMO. With a story that can be tackled solo or with a friend, a complete roster of varying creatures, and battle mechanics that offer up a bit more strategy than a certain other monster catching RPG.

I started out with the character creator trying to get as close to my style as possible, which I managed to do just fine. There were no glasses to choose from the off, but I soon found a pair in one of the stores later into the game. After a bit of cutscene dialogue and a bit of an explore, it was time to get my first Temtem. I went with the monkey-like ‘tem – Smazee – but he quickly would become a secondary team member once I started collecting more.

It has the feel of an RPG down right, with the option of multiple dialogue strands with a large chunk of the NPCs I encountered. Even with those who wanted nothing but a battle, the option of choosing how I reacted to certain comments made it feel like I was more involved with my adventure. Some of the options were also the information gathering type, so you could ask someone what they’re doing or just leave them be with a cheery goodbye. 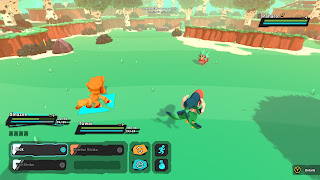 Within battles, you’ll need to be aware of the stamina of each ‘tem, as all moves require the use of some of it – with more powerful moves taking a large chunk from it. Some of those powerful moves won’t be available for use until a turn or two passes. There’s still type advantages to be found here, as well, so it’s not just a case of waiting it out them unleashing a powerful move after a few turns.

I was impressed with what I’ve played of it, and while comparisons to Pokémon can’t be escaped, I’m not looking at the main series here with this comparison. Instead, it feels like how a current-gen follow-up to Gale of Darkness would be if it moved away from the Orre region and linked the towns together. There was something to the design of the Gamecube games that I feel was never replicated in any of the main series games, but that Temtem does.

Part of that comes from a feeling of connectivity with the world, where everything looks as though it would really be there – even if certain creative licence is taken in the positioning of small parts of locations. Another part is – feeding into the connectivity again – that despite offering a maze-like structure to locations, they still feel natural parts of the world. The third part relates to NPCs and their fitting into the world as natural objects within it, offering a greater sense of them being a part of the world through dialogue.

Both games are RPGs, and both are on Early Access. But despite that, both feel pretty much complete already, but the fine-tuning of certain things from feedback of those who play them will help in bringing out the best of them. Both offer great dialogue and a great world to explore, in an art style that fits for what they are. I’ve enjoyed what I’ve played of both, and will be sure to continue exploring what each has to offer.
Posted by Christopher Searle at 22:10
Email ThisBlogThis!Share to TwitterShare to FacebookShare to Pinterest
Labels: experiences, gaming