Last month I offered up some ideas for games within the Pokémon franchise, with the three fitting roughly into the labels of main game, side game, and spin-off. This month I am doing the same for the Sonic the Hedgehog franchise.

Now, it would be easy to say for a main game Adventure 3 – specifically Chao Theory (that old concept of mine from back in 2013), but I’m not. What I want to see from a main series game these days is something that Lost World failed to execute beyond basic implementation. 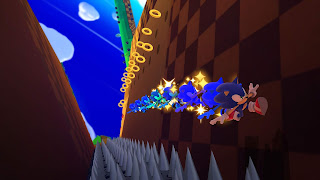 That being free-form movement, otherwise known as parkour. It was a system in Lost World that was rigid and restrictive, but showed a lot of promise had it been expanded on in future games. Instead, we return to the boost formula with Forces. A boost formula that was watered down greatly from Generations. I’m proposing a return to the Lost World formula, but opening it up a lot more. There’d still be two speeds, but instead of jog and run, it would be run and boosted run.

Not boost as already known, but a way to go faster that poses a risk if you run into enemies while using it. This greater speed is what is needed to access the freeform movement options, but to a greater degree than Lost World offered. As you run up walls, you will naturally lose momentum, so the greater the angle of ascent up the wall, the faster that momentum will be lost.

There would also be more freedom in the other moves Sonic could perform, with the ability to air dash off walls, and then into a bounce. Or perform a bounce into an air dash to a wall, where you’d then be able to launch higher up by jumping. Even enemies can be used in such a fashion, where homing into them and pressing the dash button at the right moment will see Sonic launch away from them rather than destroying them, allowing greater forward momentum should you need it. 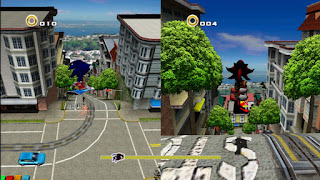 That’s the main game, but what of the side game? I consider the Rivals games to be side games, since they rely on platforming as well as being a racer. Those were 2D platformers, using multiple characters that shared roughly the same moveset trying to win out against the other while using powerups to hinder the opposition or help themselves gain an advantage. Remind you of anything?

I certainly seemed to think so in 2013 when first proposing the idea in the first What I’m Waiting For. Helped along a bit by using a current rumour that was going around, I made the proposition that it sounded similar to not only the Adventure games, but also to Rivals. From there, I created the idea of having a Rivals game in 3D, though left it at that. The idea hinted at was to use Adventure 2’s multiplayer – specifically the action races – as a base to create this new 3D Rivals-like game.

And this is where I borrow some parts from that Adventure 3 idea I mentioned above. The fourteen stages from that concept would be halved, giving just seven stages with three zones each. Two regular race zones and a boss zone. The gameplay would stick closely to Adventure 2, and being in 3D there would be multiple routes through levels offering varying levels of distance and difficulty. The AI opponent would make decisions based on your own position as to which path it would take. 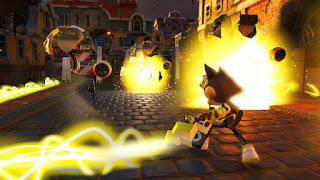 That’s all I’ll mentioned with that one, as there’s the spin-off game to mention as well. And that spin-off game is building off what Forces gave us in the Avatar system, but turning it into an action-RPG. It’s been suggested plenty of times around – or at least in terms of giving the Avatar characters their own spin-off series, and I’ve been thinking about that and this is sort of building off an unreleased concept I’ve considered for the main games.

Yeah, a main game built as an action-RPG sounds crazy. But it was something I was thinking of a few years back, and then Forces happened which changed the tack of the idea. The Wispons would be expanded to give greater capabilities than what Forces offers, giving varied movement and combat options that would be expanded as your character levelled up. The grappling hook would also play a part in that, and would be able to freely be used, going into bullet-time whenever you aimed it.

The story wouldn’t need Sonic to be a part of it, or any of the main cast. Eggman wouldn’t even need to be the villain. It allows a different view of the world that we never really see. And if you say that doing such a story breaks the flow of continuity, I’d say that’s just being limiting. Sonic can’t be everywhere at once, and while he would be the hero of any situation he comes across, it also stands to reason he wouldn’t hear about everything that goes on in the world.

That’s three ideas within the Sonic the Hedgehog franchise, each offering something new while expanding on things previously seen within the games. There’s nothing ground-breaking or wacky about these ideas, but I feel all three can work. What about you readers, though. Do you feel these ideas a re worth pursuing, or do you have something better? Sound off down below.
Posted by Christopher Searle at 19:23
Email ThisBlogThis!Share to TwitterShare to FacebookShare to Pinterest
Labels: gaming, ideas, Sonic the Hedgehog