From when they were first announced, I’ve been wanting to get stuck into this one and explore this new world. From the E3 trailer, I’ve wanted to dive into the Wild Area, and wondered just how it would feel for that taste of openness for a series that, even now, has design ties to its past. And then ever since, I’ve waited until the day – this day – where I have now lived within the Galar region. 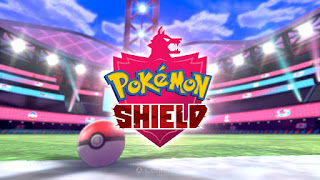 Now, there are some issues I have, but they’re not that important for the sake of these impressions. It’s more for the concept side of wanting the series to grow into something larger than what it is, faster than what it can. The improvements within the game are a step in the right direction, and are something I want to see built on. Especially when it comes to the Wild Area.

The Wild Area might look a bit lifeless, but it works for what it needs to do. That being the first taste of how a vast open space works in the main series. Many types of Pokémon roam around here, popping up whenever you get close by, ready for battling and capturing. Locking the higher-levelled ‘mon from capture behind the Gym Challenge might be a bit restrictive, but unless you get lucky, there’s little chance in you surviving long enough to have a chance to nab one anyway.

Split into many parts, each has a different selection of ‘mon to engage with that will only be found in a few of the sections of the Area. There are also trainers around who will offer items or other services, with the watts you find from dens being the currency most of them want. It’s a location that does what it needs to do, but unfortunately can be seen as mostly optional. There are only two points when following the story you will ever have to be here, owing to how the region as a whole is designed. 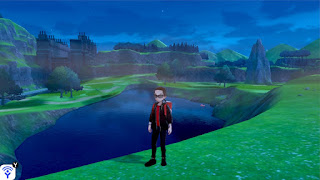 But even the rest of the region stands out as being a diverse one, with the rural farming community to the south, and each of the cities on the central ring being vastly distinct from each other – something that the upgrade to a console shows off greater than the 3DS ever could. Even the routes pop as being varied, with a greater use of background elements being used to diversify them.

Battles are much the same as ever, but the dynamic feeling to the moves is slowly getting there. The camera could use a bit of work, as it still feels the need to revert to that static, familiar viewpoint after every move. Ever since the move to 3D, I’ve disliked the fact the camera is still trying to stay in that position for as long as it can. It’s better here, as it does move around more during moves and will only wait a few seconds before starting to roam between turns, but I still feel that viewpoint just is not needed any more.

As for the thing that gives the reason to all this, the story is focused on the Gym Challenge, and is a large part of all interactions within the game. It does a good job of creating characters that fit the themes it wants to explore during this Challenge your character embarks upon, such as confidence, wrong-doing, and the effects of popularity. Sure, your own avatar is as blank slate as ever, but at least they show recognition of what’s happening around them now. Sometimes.

Customising the outfit of your character is back, with plenty more clothing options, and even hairstyles. This time I feel my character looks close to me in fashion styling rather than a close approximation, and if I wanted, I could go for plenty of other stylings as well. It might not be fashion on a grand scale (I doubt there’d ever be as many options as in GTA V, for example), but there’s a varied choice with a number of colour options per design. 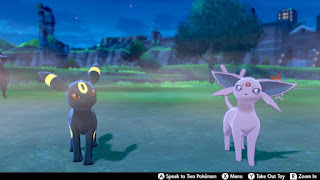 Overall, though, Pokémon for me has always been about making memories and enjoying the journey. The music works in doing that, as does the variety of new creatures that fills the roster of all those available within this region. I’ve got a few favourites, one of which I had no idea about before encountering it, which goes to show just how great moments such as that can be created from the unknown. That also applies to the camping feature in the game, where unexpected and cute moments can show themselves at any time.

Yes, graphics aren’t exactly the best, and there’s a few rough patches in animation, but if you can overlook those factors, Galar is a great place to explore. Sure, I’d like more to fill this world and for a lot more openness in the routes between cities, but those don’t stop me from enjoying the game. There’s also a weather system in place in the Wild Area that makes no sense whatsoever, with each section having its own set weather. Problem is, with how small these sections are, it’s just bonkers to go from a harsh, sunny day to chaotic thunderstorms in the space of a few steps. Especially if you can’t actually see that weather until you step within the section it’s happening in. But, that’s just something inconsequential when looking at things completely from within video game logic.

Sword and Shield might appear basic, and to be fair, they are if you compare them to any number of other releases on the Switch. But everything here allows the player a journey they might just find something special within. And for that reason, I can certainly recommend it to anyone who wants to enjoy such. Older fans who want something more from this series, this probably isn’t going to be for you. But if Game Freak can build on what they’ve given us with the Wild Area, and continue to improve the look of the core reason to play, generation nine will hopefully offer plenty.
Posted by Christopher Searle at 20:35
Email ThisBlogThis!Share to TwitterShare to FacebookShare to Pinterest
Labels: gaming, Pokémon