Mario and Sonic and the Olympic Games Tokyo 2020 - First Impressions

I remember vaguely getting the first of these games and having a great time with it. Back when the Wii was still the most popular machine in the house. Back when I was still growing into the man of gaming culture that I am today. But while I enjoyed the game, I didn’t get another within the series until it moved to the WiiU with the Winter Sochi Games, where I similarly enjoyed what it offered. 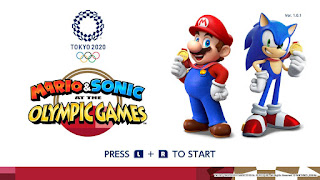 And now, the first game in the series on the Switch is here, and it again provides the fun that is expected of the series. It feels as though it has lost a lot of the charm that makes the games, however. The characters from both series are still here, and with the story mode there’s some interaction between the two worlds, but other things stop it from being that greatest of crossovers between the two.

Yes, it is the Olympics, so there has to be representation of the real world within it. But the best thing about the games was always the extras that brought the elements of the two universes to the fore. Dream Events would always bring smiles of delight at seeing what interesting spins on events and the locations they take place, and it is kind of lost here.

The three events that are here are fun distractions, with the best for me being Dream Racing. Sochi was king for me in having a variety of different ways to race, so of course I’d latch onto the racing event of the new one. Despite the fact there’s only one track based on Metropolis from Sonic Forces, it executes the feel of racing well, so two runs never feel similar. Dream Shooting is the next bets for me, since Dream Karate feels too random to have much of an impact. 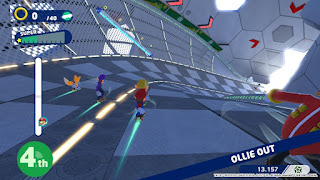 As for the main events, there’s plenty on offer giving the usual bout of mayhem, from regular inclusions such as the 100m and swimming, to new events such as skateboarding and sport climbing. Some favour speed, while some favour a more strategic approach, but all are fun to play through. And that goes for the Tokyo ’64 games, as well. They bring the retro feel to the Olympics, and are great fun even if not as long-lasting. It’s a double-edged sword, for me, I guess. I like retro games, but at the same time can’t feel any immersion from them anymore.

As for the story, it brings both 2020 and 1964 Olympics together with a simple story that serves its purpose to get players experiencing everything that the game offers – including the unlocking of a few guest characters and minigames that are playable within the Games Room. And while above I did say there’s interaction between the two worlds, it’s very surface level interaction. It offers some good character moments at times from what I’ve played of it (and I’m about halfway through it), but it’s dressing to get you to the gameplay.

And now, I’m back to those things that make it not the best it could be. I know I usually avoid comparisons when it comes to reviews (or first impressions), but there’s a lack of that magic that only sparks during the Dream Events but can’t really be fully set alight. The key component of doing a crossover such as this is the fan service – especially since it’s a party game. There’s very little in the way of recognisable music – whether remixed or not – from both series. There’s no customisation options available which means there’s little in terms of visual fan service as well.

This is a first impressions post, so I’m not going to dive into it, but I have ideas on making an ultimate version of a game in this series that includes a lot of what is missing here. And if a core component of a series is missing, is it really worth it to buy?

The gameplay is solid and there’s fun to be had, especially with friends gathered together. And while I’m strongly wanting the fan service to be there, that might be something that others aren’t wanting as much. So in terms of recommendations, if you’re here for the fan service, there’s little to get from this one. However, it’s a party game, and while there’s not any sort of mode that brings that feeling here, it still stands as one to add to the collection for those who enjoy a good game for a bit of multiplayer mayhem wanting something new.
Posted by Christopher Searle at 13:14
Email ThisBlogThis!Share to TwitterShare to FacebookShare to Pinterest
Labels: gaming, Mario, Sonic the Hedgehog