The Republic Commando series started as a video game where players followed the story of Delta squad. While a second game was planned, it never saw the light of day. Meanwhile, the tie-in book dealt with another squad of clones – Omega. The book series – written by Karen Traviss – continued following the events of the game and expanding the world of the Republic Commandos.

Hard Contact – the first of the novels – released in 2004, and while I didn’t own it on release [after all, my first introduction to Star Wars was the tail-end of 2006] it became one of the first novels in my Star Wars collection. Just like with Battlefront 2, you could say there is some nostalgia clouding my thoughts. This review should say why that isn’t the case. 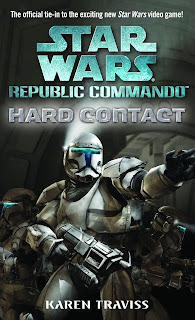 Four clones who have lost their squads in battle are formed as a new squad – Omega. Their mission is to sabotage a nanovirus research facility located on a Separatist-held planet – operating with no backup and a limited supply of weapons. Help comes in the form of a Jedi Padawan, though she isn’t the best and is unable to call on her experience when she needs it most.

Darman and Niner are the two clones who have their points-of-view explored. As squad leader, it is Niner’s job to keep his squad alive and well. And it is with Niner’s POV that we see the squad bonding together. There’s the feeling that the hard times are forming them into a squad, and it’s the same thing we see with Darman and Etain.

Etain is the Jedi Padawan – stuck on Qiilura when her Master accepted a mission on the planet and then got himself captured. While she might lack Jedi experience, she was able to use her other qualities to source a massive amount of intelligence that Omega needs to complete the mission. Her point-of-view deals with her coming to terms with her own inexperience, being thrust into a new situation all Jedi now find themselves in, along with her growth into becoming the Jedi Darman sees in her.

All three viewpoints are written well, dealing with the situations with the right amount of pacing and the right amount of maturity. While it isn’t as apparent with Hard Contact, there are still areas where the realities of war make themselves known. And it works. What also works is the way it goes about introducing the Mandalorian philosophy.

The story is effectively Mandalorian versus Mandalorian. We learn that the clones were trained by Mandalorians all hired by Jango Fett himself, and the fourth viewpoint in this story is a Mandalorian by the name of Ghez Hokan – the chief enforcer on the nanovirus project. Here we see how effective the squad’s tactics work, as Hokan makes tactical guesses about what he is facing and how best to deal with the situation.

The story wraps itself up nicely with the final battle forcing yet more creativeness on the squad’s part, showing how much Etain has grown in a short amount of time, as well as having all the characters here face the reality of the cost of war and showing how each of them deal with that.

Hard Contact sets up quite a bit of stuff to come in the future, showing characters who will become an important part of the story, along with more ideologies of Mandalorians. It creates a team in Omega who the reader wants to see succeed, as well as Etain’s growth. Also here is something that becomes even more of a focus in the future as the clones experience more of the outside world and start to question their existence.

Hard Contact is a great start to a series. It is definitely worth a read to those who are interested in a more mature take on a Star Wars story – Rogue One aside. While I can’t really do a sum-up of the entire series yet, I can say that the same style of writing carries on through all the novels, with a nice flow from book to book.