Feeling the Hot Pursuit As I'm the Most Wanted

With the recent news that Criterion are back onto Need For Speed, I’m hyped. The team might have seen some change since Burnout Paradise, but they are a great studio. That concept they had for the extreme sports game never got off the ground, but there was promise within it.

And you’ll note that I said back to Need For Speed. Once finished with Burnout Paradise, the Criterion team were put onto EA’s other long-standing racing series to make Hot Pursuit. After the success of that game, they followed up with my personal favourite of the series in Most Wanted [2012].

While they did help with Rivals, their time on the series looked as though it was done, with Ghost Games [now EA Gothenburg] being the main developer of Rivals and taking on the series since that time.

With the news that Criterion are back, I’ve been revisiting those old games they have to their name to see what it is I liked about them. And though they differ greatly from the other, they both have something to enjoy. 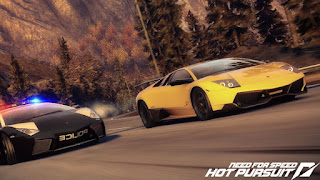 Hot Pursuit took the cops and crooks concept and ran with it for the whole game, offering a mission structure that followed both sides. As the cops, you’d be hunting down racers, smashing into them and using the equipment on hand to arrest them. While the racers also had equipment, these were more defensive blocks to the police’s powerful force as you tried to complete the race.

The mission structure allowed both sides to be playable from one career, earning experience in the form of bounty to unlock new cars and equipment for that side. At first, you would start off with little in the way of power or speed, but through gaining experience would become a force to be reckoned with on whichever side you chose.

While there was also a freeroam mode, it felt a side feature to the missions. Despite not getting far with those missions, I could be found within the freeroam often, riding around in a police cruiser just taking in the scenery. The map might not be the most refined, but there’s still a decent amount of things to explore within it.

With Hot Pursuit’s map being more natural, the bustling city of Fairhaven is where Most Wanted takes us. And this time, the freeroam was the main attraction. Taking cues from Burnout Paradise, billboards and security gates are around to smash, with speed cameras also being placed around the streets. 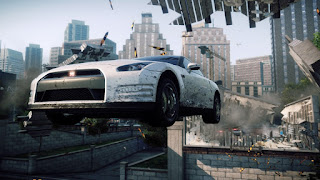 The difference with Paradise are jackspots – the way to gain new vehicles. Scattered around the map are plenty of these spots that grant access to new vehicles, being in both easy to spot and hard to find locations. Once you’ve found a vehicle, it gets added to the list to warp to for future use, though you can swap at that location.

Each vehicle has six events tied to it to unlock performance upgrades for that car. The reason for doing so is to encourage swapping vehicles to build up your Most Wanted level, as there’s ten drivers who will only challenge you once you have enough Most Wanted reputation.

I love exploring this world more than the one in Hot Pursuit, with the cops always on the lookout for wrong-doing and some very great chases able to be had. This was one of my most played games on the PSV, such was the fact I had double the Most Wanted level of the highest on the list when returning to it on PC.

Neither game has the size or variety in their maps as latest games, but those latest games lack something in terms of mechanics when driving. I’ve still yet to play Heat, but it is one I’m wanting to get to. As Ghost Games’ last, it will be interesting to compare their first solo effort to their last.

As for Criterion and the newest game they are working on ready for the next generation (for a release in 2021, I expect), I hope it can be as great as these two games rolled into one. Featuring the exploration of Most Wanted with the tightness in mission structure (and the cops and crooks concept) of Hot Pursuit, and a map that I’ll want to be exploring featuring plenty of variety.
Posted by Christopher Searle at 13:21
Email ThisBlogThis!Share to TwitterShare to FacebookShare to Pinterest
Labels: experiences, gaming