Rallying the Last Piece of the Racing Puzzle

I’ve played plenty of racing games in varying different styles across the numerous years. There’s a certain type I had not really played all that often, however. Aside when being at an arcade and able to access the Sega Rally machines, I hadn’t really played any sort of a rally game. I felt that I’d not be much good at them, with the thin tracks and my varied skill in racing, so I was content to just let rally experiences be something contained to those arcade machines.

I usually read reviews from Nintendo Life even if I’m not much interested in checking a game out, just to see if there’s anything that I’d like in it. Every possibility I can be convinced to try something new, after all. On New Year’s Eve, I read a review from the site for a racing game. A rally game. Sure, it was a mobile port, but it looked as packed of content as plenty of other racing games, with the review and comments saying how the gameplay was excellent, rivalling plenty of other racing games on the Switch. Did I want to go for it, though? 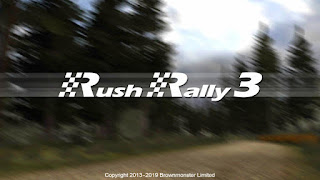 As soon as New Year’s Day hit, I was on the eShop to get it. The more realistic racers I would usually keep contained to the Xbox, but this one I wanted portable so I could jump straight into it. So, half an hour after the new year had started, I was to be found playing Rush Rally 3. I’d started with the career, buying my first car and giving it a bit of an upgrade, then getting into that first championship. I managed to drive the stages well, though did mess up at times. I did good enough to secure a third, and after that went straight back into it after a sleep to secure a better position.

The mechanics of racing just felt right, with no errors being down to those mechanics. Every mistake was down to me, and how I mishandled the vehicle overcorrecting a turn or forceful use of the handbrake. Opponents are skilled enough so a few small mistakes didn’t matter, with me barely scraping victory in a few of the stages and others just falling short of the top spot. Overall, I managed a second in the championship, which I was happy enough with at that point to want to explore the other options within the game. 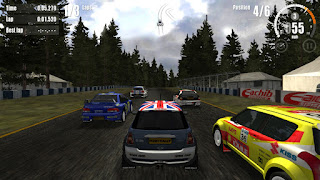 Rally Cross was more like the usual racing experiences I would play, with other competitors on the track and three laps to take the top spot. The handling worked here as well as in the rally stages, with me managing the same results in this mode as in the career. Skill Games test the ability of a driver to keep a high speed while avoiding obstacles. It’s difficult to remain on a driving line with traffic on the road or missiles being fired at you, but the best drivers are able to claim the gold on the mode. I… can’t be counted among that number yet.

There’s also the Single Rally which I had a go at, where drivers have to tackle the six stages of a country while managing not to damage their car too much otherwise they’d end up at a disadvantage when it came to repairs at the end of each even numbered stage. Much the same as ever, I was close to the top spot but failed to get it owing to one rather large mistake undoing the great work I’d put in to get a great advantage over the other drivers. 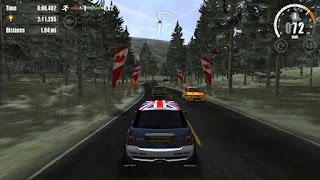 There’s still a lot to be doing with the game, as I’ve only started out with most of what the game offers. I’ve still yet to touch the time trial modes of Single Stage and Hot Laps, and I haven’t been able to get a Live Event done yet owing to not having a car at the right ranking. Much like other games, the upgrades on a car determine its rank, and I really wanted that Mini-like car that I spent the winnings from all the racing I’d done on it along with a few upgrades.

The experience I’ve had with Rush Rally 3 has been great. It really is right at home on Switch. And now that I know I’ll enjoy getting stuck into some other rally type games, I’ve already got my eye on one from Game Pass. Rush Rally 3 has also encouraged me to branch out again with racing games, having for the most year mostly stuck with Forza Horizon 4. I’ll be enjoying this one for a good while, with it comfortably sitting at the primary game spot for Switch.
Posted by Christopher Searle at 20:52
Email ThisBlogThis!Share to TwitterShare to FacebookShare to Pinterest
Labels: experiences, gaming, Rush Rally