I said in the monthly update that I would be unveiling the completely new state of Michigan within the GTA-verse. Instead, I’ll save that for some other time, as I want to put focus somewhere else today. And that focus is on the leaks. The ones that say GTA VI is nearer to release than we think and give us an idea of where we’ll be exploring. So, using the information gathered by Gfinity, I’ve cooked up a concept of what that map might look like. 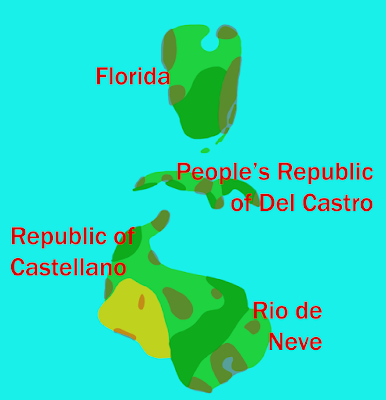 From the leak, we have Vice City returning, but there’s some new places that have never been seen within the GTA-verse before. A combination of Cuba and Panama will create the People’s Republic of Del Castro. Well, it’s more like this fictional island will be based on those two places, but there’s sure to be many influences from both present. Bolivia and Columbia combine to form the Republic of Castellano, with Rio de Neve – the GTA-verse Rio de Janeiro – also being present.

The leak also mentions that Mexico and Liberty City will be available in a limited capacity, which more than likely means they will be exclusive to the story and not available when free-roaming in the open world. Even so, this map is said to be the largest yet, with other minor cities populating the world. The story will focus itself within the 1980s, with a heavy focus on drug smuggling and the cartels that deal with such things. This will also be a next generation only game, meaning the PS5 and Microsoft’s Project Scarlett.

But… that’s information that will be revealed through official means soon enough. And while I did enjoy the story of GTA V, I’m more interested in exploring new worlds. Let’s get back to that map of mine.

Vice City is Vice City. We’ve known of it throughout the history of GTA games. But the city itself is all we’ve ever seen of the GTA-verse Florida. I’ve said before [on GRcade and other places] that it would be interesting to see more of the GTA-verse Florida than just one city, what with the Everglades and various other national parks. Then there’s Cape Coral, which – if the story is indeed told across various points of the 1980s – could explore the effects that the economic crisis had on one of the fastest growing cities in America.

Those previous plans I mentioned featured Lake Okeechobee and a few of the towns surrounding it. With this map, it has instead been made a part of the sea. So with Vice City taking up most of the east, the national parks filling out the south and central areas, and Cape Coral being placed on the north-west, there’s still room for a few of those towns to surround what would be the lake. There are also two other cities present, with a merging of the various towns west of the national preserves forming one, while the other merges Port St. Lucie and those towns that surround the St. Lucie river to be the other.

Now, I can’t claim to be knowledgeable on any sort of history to do with 1980s America. But the basis of creation for official maps in the GTA-verse has always been to base the states on the largest cities. For Del Castro [to give a shortened name], then, the two major influences for its main city would be Havana and Panama City. And since this is a fictional island, the placement of the city can be anywhere on the landmass. I’ve gone for a central location, that allows for a port on both sides of the island.

Since this largest of cities that merges the two is in a central position, I've given those on the east and west stronger influence based on Panama and Cuba respectively. The western-most city merges La Fe, Sandino, and Guane into one city, with Jaguey Grande, La Isabel, and Playa Larga merging to be the other Cuban city. As for those cities within Panama, the eastern-most is made up of those towns and cities scattered throughout the Darién Province, with the other merging those of the Los Santos Province.

Just as the two largest cities of Cuba and Panama make up one city for Del Castro, the same applies for the Republic of Castellano with Colombia and Bolivia. This state offers a great amount of verticality as it would be the most mountainous the the states. Bogota and Santa Cruz combine to make for one city, with it sat on one of the highest points of the state that's not a part of the Andean region. Just as with Del Castro, other cities take inspiration from just one of the merged states. Barranquilla and Cartagena merge to form one, Cúcuta and Puerto Santander form the second northern city, with Puerto Carreño and La Primavera forming the last of those from Colombia.

The yellow you see on the map marks the Andean region within Bolivia. This marks some of the highest terrain in the world, and while you would never be able to recreate it accurately while leaving room for cities to be within it, there's scope for... at least a decent attempt within a small area. If you think on the mountainous areas within Blaine County on the GTA V map, then quadruple the size of it, that's the sort of size I'm thinking of to allow one city and various other parts of the Andean region to be represented. And while Chile separates Bolivia from the sea, within South America of the GTA-verse Chile would be a separate landmass (at least until there's enough states within the GTA-verse to bring them all together to create one massive, interconnected map).

It wouldn't be South America without the Amazon Rainforest, and while it would be easier to recreate accurately than the Andean region, there's still the problem that a certain country is mostly missing from this GTA-verse map, which shrinks the amount of the rainforest you'd get within it considerably. Only fifteen percent of the entire rainforest at an extreme maximum would be featured within the map, and that's from forcing it to co-exist with the state of Rio de Neve.

And leading into Rio de Neve, its main city shares the state's name, same as with its real world inspiration. The city of Rio de Neve has a different border to that of its inspiration, emcompassing the entire Guanabara Bay and reaching the Amazonia. There are two other cities in this state, with the one of the western coast being a merge of a few of those towns within the west zone that are no longer considered a part of the city. The easern city would be a combination of São Fidélis and the north of Campos dos Goytacazes. While there’s verticality in this state, it doesn’t reach the heights that Castellano would reach.

Now, this is my concept for how the map would be like, and while I haven’t gone into detail about specifics, I can see this being pretty close to what we get. There’d be less empty space, or at least space without anything happening in it, and I can see the Andean region not being as large in the official map. Florida is the state I expect will be vastly different to what I expect, as aside from adding in the Everglades, I can’t see much else being featured beyond Vice City.

That Vice City should appear almost completely different, however. I don’t see the military base staying within the city, and the mainland will be more populous than the beach section of the city, which is something I felt was odd about the map in the 3D era games. I still expect the golf course to be around, and a few of the more recognisable areas from the 3D era map (though obviously not appearing exactly as they did on that map).

Los Santos and the state of San Andreas is a fun map to be exploring in GTA V, but if these leaks do prove true, we could be in for a map that is much greater to explore. Rockstar have tested the power of this current generation in terms of crafting open worlds with Red Dead Redemption 2, so even if GTA VI doesn’t use the full power of the next generation consoles, it will still be a great opening into what that next generation can bring.
Posted by Christopher Searle at 17:11
Email ThisBlogThis!Share to TwitterShare to FacebookShare to Pinterest
Labels: gaming, GTA, ideas