The final day certainly felt like the final day. It was a day of looking back and the final celebration of many 20s. The Phantom Menace, Resistance, and the Closing Ceremony all took the time to look back at all the fun that’s been had with various aspects of Star Wars, and at the end of the day the announcement of the next.

The Phantom Menace panel took a look back at the film, with some of the production staff coming up to talk starting out, creating the effects and designs, and working together to bring these worlds and characters to life. As well as their favourite moments of working on it. There’s a good number of things said during this half, with two of those on stage talking of their cameos within the film.

Ian McDiarmid and Ray Park get on stage to talk landing the roles, crafting the characters, and stories from the set. Ray Park talks his cameo as a Naboo guard and both talk about the fan reaction to the characters. Ahmed Best and Anthony Daniels join them to discuss the same things. As ever when Anthony and Warwick get together, there’s friendly jesting at every opportunity.

The start of Celebration is also talked about, with a few stories of that first event that both Ahmed and Anthony were a part of. The production staff are brought back and a message from George Lucas is played. Warwick thanks those people on stage by recognising their accolades from The Phantom Menace and beyond. Except for Anthony at first, who Warwick pretends to have forgotten.

Ian McDiarmid talks fan reaction to the laugh at Rise of Skywalker, a bit about getting onto Rebels, and how this evil dude is universally loved, and James Arnold Taylor riles the fans up with a “Hello There”. There’s also a Dianoga cosplayer around.

The Resistance Season 2 panel starts by bringing all the guests out and starts from the beginning of the show during the first ideas of it. The actors talk characters, and are even so like them that it comes across in their actions. They also talk about recording sessions. Talking favourite episodes of the first season and the season as a whole, they then move to discussing the second. That we on the livestream don’t get to see. 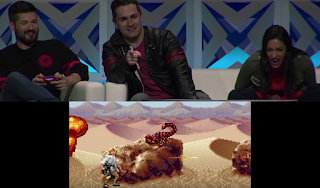 Warwick Davis hosts the Closing Ceremony panel, starting by checking in with the other stages for highlights of the events. On the Star Wars Show stage, members of the 501st Legion come out to honour the contributions of Andi and Anthony to the Star Wars community by making them honorary members of the Legion. The Galaxy stage gives their thoughts, with a clip from the Star Wars Let’s Play panel that looked a riot. I’d have really wanted to see the entire thing. They thank the crew that put the entire Celebration together.

Back at the Celebration stage, Warwick talks about the panels that happened there. He shows The Clone Wars trailer again upon reaching that panel. He saved The Rise of Skywalker for last and rolls that trailer again. A highlight reel of what’s been happening over the four days was played, showing the community spirit of the fans. To announce the next Celebration, they do a recreation of the hallway scene of Rogue One by including the fans at the panel by having them pass a giant datachip and lightsaber in a race back to the stage. Anaheim 2020.

For the last word, Warwick gives a big shout out to the people that help organise the Celebrations and run them, that the fans have had a great time and made plenty of memories, and thanks again the people on the other stages. It’s then back to the Star Wars Show stage to thank the fans, crew, and builders of the sets around Celebration, and fire off the T-Shirt cannons one last time – filled with celebratory confetti.

It’s been a great ride, and a lot of fun watching from home. I’ll have one last post giving some final thoughts, so be sure to check that when it comes.

Celebration Chicago Series
The Starting Celebration / Rise of the Heroes / Spirit of the Universe / A Shining Joy / The Fun Celebration Memories / Ending of the Celebration
Posted by Christopher Searle at 14:04
Email ThisBlogThis!Share to TwitterShare to FacebookShare to Pinterest
Labels: events, Star Wars Celebration