Day Three was set to be my favourite of all the days with just those three words. The Clone Wars. And that panel was a great one. There were plenty of things to see from the show floor and the guests, and the continued celebration of The Phantom Menace continued with an interesting look at its design.

The Mandalorian had Dave Filoni and Jon Favreau talking about how they met and the project got started. Pedro Pascal, Gina Carano, and Carl Weathers are brought out and talk of introducing their characters. Those at the panel then got to see some footage that lasted three minutes based on the timer that those on the livestream got to see.

A story of working with the 501st Cosplayers is shared, behind-the-scenes of building props is shown – including the ship that The Mandalorian uses – and using the miniatures in flight tests. I couldn’t fully enjoy this panel, though – because Youtube would not stop erroring within every minute! There were some interesting other facts shared about production thanks to some Twitter questions, though I barely got to hear any of it thanks to that issue.

The Star Wars Show livestream started up with no errors appearing at all, so why it was messing me around with that panel I have no idea. The guys that hosted the Toys That Made Us Netflix series appeared to talk about the Star Wars episode. It’s certainly a time for twenty years of plenty of Star Wars things, as Lynwen Brennan celebrates twenty years as LucasFilm, and she joins the Star Wars Show stage to share the story of joining the company and why she remains with them. 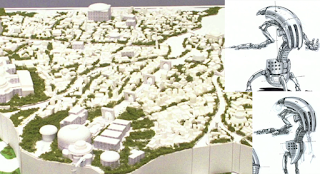 The next panel shown was Doug Chiang: The Evolution of Star Wars Design, looking at the process in designing for the prequel trilogy. He shares how he pushed himself to improve in all aspects of design for a year and finding his own style before sending it all to LucasFilm and finally landing the job of design director. Then working with George Lucas to develop the feel for the prequel trilogy, and the influences they worked with.

He revealed a load of concepts, including a wall of shame of rejected ideas. How ideas that don’t work in one place can always be used elsewhere – such as a Neimoidian concept becoming the Geonosians. How the droidekas came to be. The designs being translated to 3D models and being used in production.

The panel proved a very interesting look at building the world of the prequels, with a section on the podracers and constructing the unique look of them, as well as the course of the race. The creation of Theed was also covered, with an entire model of the city created to map it all out. It’s amazing to see the process of all this work and the rules that were laid out to aid in its creation. 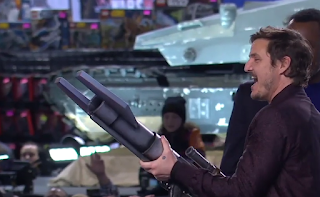 The three actors who appeared for The Mandalorian panel took the stage to talk, allowing me to finally hear the things I’d missed out on. The three characters certainly sound like they have their place within this world, and their interactions are sure to be great. The T-Shirt cannon got an upgrade to be stylised after The Mandalorian, and these three actors got to fire it first.

I think the return of The Clone Wars is my most hyped panel, and it gave a great look at what’s to come. Dave Filoni, Ashley Eckstein, Sam Witwer, and Dee Bradley Baker are on stage to talk the new season. Dave Filoni starts it off talking about how it came to be that we are getting the new season and getting it done right. The cast members talk about returning to the show and finishing it. Ashley and Dee reveal how she found out through a text conversation with him. Sam brings up the Siege of Mandalore and how they only had as much as they needed to during the meeting of Maul and Ahsoka in Rebels and how he found out that they’d be returning to that story.

The Bad Batch arc is confirmed, with this being the closest to the old feel of the show – which has seen some evolution to use the new technology. A clip is then shown of the arc where the Bad Batch is storming a line of droids. Ahsoka is shown with a change to bring in some of that Rebels design, with Dave talking about finding herself now she’s left the Order. 1313 is mentioned as a place where she meets two sisters, and that is another story arc shown with another clip of how she ends up down in the lower levels of Coruscant.

Then we get to the Siege of Mandalore. It had to be done right. It’s one of the most important arcs for a number of characters and a pivotal point of an entire culture of people. Maul has seen a redesign to look similar to his appearance in Solo. And for Maul, it’s a very important arc, as Sam talked about. The sketches of the arc are shown that’d we’d once seen from the Untold Tales panel from a past Celebration. They wanted the best lightsaber fight of the entire series, so they got Ray Park into a mocap suit to create it. And then the final clip, that while not final animation, is pure emotion.

More of The Clone Wars cast are brought out to the stage, giving Matt Lanter, Mathew Wood, James Arnold Taylor, Catherine Taber, and Tom Kane a chance to talk about coming back to the show, and they revelled in being back together. Dave gives a shout to George Lucas and the mentorship he received from the master. Then… the full trailer. And… just magical. There’s so much to these three arcs that’s being hinted to. And that opening of the final moments of season five just really hit hard that we’re really getting the true end.

Janina Gavankar gives her thoughts on Jedi: Fallen Order and about Iden Versio and the fan reaction to her, a marriage proposal happens on the Star Wars Show stage, and there’s talk about audio and dubbing action scenes with many people with Mathew Wood. Sam Witwer and Matt Lanter also join the stage for talk on The Clone Wars with a bag of sand cosplay in the crowd. Tom Kane talks getting the job of voicing C-3PO, Yoda, and other characters within Star Wars.

Celebration Chicago Series
The Starting Celebration / Rise of the Heroes / Spirit of the Universe / A Shining Joy / The Fun Celebration Memories / Ending of the Celebration
Posted by Christopher Searle at 15:22
Email ThisBlogThis!Share to TwitterShare to FacebookShare to Pinterest
Labels: events, Star Wars Celebration