A year after True Colours released, Order 66 followed. The decision to have it as A Republic Commando novel instead of Republic Commando: Order 66 fits in with how this novel is presented. Each of the previous books dealt with the space of around a few weeks – not counting prologues or pre-war history. It also fits in with the two trilogies format of how I’m guessing the entire story would have played out.

I won’t talk about that yet, but the indications for such a thing happening were clear once the next novel in the series released. As for Order 66, it deals with the Jedi Purge and a year before those events happened. There’s a real urgency in the plan to pull out, and a lot that still needs to be sorted out. 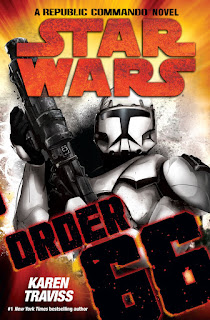 The first chapter looks at the moment that Kal Skirata was born. Not in the literal sense, but in the sense of him putting his past behind him and adopting a new name and a new family as an almost seven year old kid. The second chapter has Skirata and Vau remembering all the fallen commandos at the second anniversary of the outbreak of war. A time skip of six months then gets the story really rolling.

There’s certainly a lot of bitter thoughts about the Republic by the commandos now, and a very clear sense of the shifting tide of the war where Skirata and his extended family need to make their move to get out. A lot of plans are coming together, though that still doesn’t stop other things from catching up to them that could be the cause of all those plans to shatter.

Fi is getting back on the mend after surviving the brain trauma thanks to Jusik. Seeing how he wants to get back to normal and coming to terms with the fact he’ll never be one hundred percent of what he once was is a strong point of the book. Since Jusik left the Jedi Order at the end of True Colours, he’s been of greater help to Skirata, helping with a number of things – chief of which being his search for Doctor Uthan. He also has a bit of work in convincing a few ARC deserters he is not among their problems.

There’s a point where someone just breaks, and this book does a good job at showing that. Scorch is our viewpoint of Delta, and his going over the edge moment comes at a time of peace disrupted. Then there’s Darman, who has now been told that the kid he held at the end of True Colours is his. With Scorch, only the rage of the moment is told from his POV, but with Darman we get the full of it. Skirata finally comes clean with everything to the squad, with Darman fully going over the edge and harming the only father he has had.

And then there’s Besany Wennen, who has skated so close to the Chancellor’s personal files that for more than a year she has been on the edge about discovery, with every little thing making her jumpy. But when her only friend gets arrested for the things she was doing, that’s her breaking point. Etain has a breaking point as well, as Jusik leaving the Order gave her something to think about, and every day she wonders why she stays, struggling with helping the masses of clones with looking out for her close circle of friends.

With more than a year being focused on, there are hotspots of activity that get focus. However, the middle of the book seems to go for a record of squeezing as much as possible into it. There are so many viewpoints and so much action that it can all blur together. There seems little in the way of prioritising and little in the way of an actual timeline as everything gets fit into that point instead of being spread out in a greater span of time.

Aside from that one period of time, everything else is fine, and the ending goes for full raw emotion. The reason the book is named what it is. Order 66. The Battle of Coruscant stretches out over five days, where Skirata’s daughter is sprung from the POW camp and Uthan is rescued from the detention centre. Omega have returned and Etain is due back, but everyone is scattered around the city planet. Not even a week after the battle – the Order comes.

It’s not the clones that get Etain, though. She died as she lived – seeing the clones for the men they were and doing everything she could to protect them, even if she didn’t know them. And since Etain has been followed throughout the series, the death strikes a very resonant chord. The final few chapters deal with the death perfectly, the way everyone suffers, their thoughts on the matter, and looking to the future to make sure everything she ever wanted comes to fruition. And Darman… he made a choice. And that choice had him look out for one of his squad during the attack, leaving both him and Niner within what now counts as enemy territory.

Order 66 as a novel works. Sure, it tries to cram a lot into one period of time even though it has the confines of more than a year to work with, but it brings to an end one trilogy and works to set up what should have been the next. All these characters are defined by their actions, and while I could never say it’s the best of the series, it’s worth a read just for the end alone.