After Triple Zero, another short story got published to Star Wars Insider [87]. Odds provides the set-up for what was to come next with True Colours – introducing several factors that play a part in the whole plan to pull out from the war. When True Colours was published more than a year later, those elements were explored further.

True Colours branches out the locations rather than sticking to just one, which fits with the growing cast and ever-expanding story. A lot of new locations are within this book, with the first look at Mandalore, and a return to Qiilura. With a lot of locations, more viewpoints are also explored. 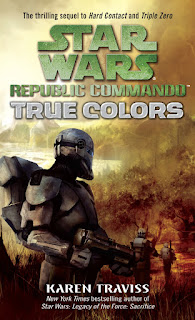 Walon Vau accompanies Delta to Mygeeto where he empties his family’s hoard of wealth. Omega have been sent to Gaftikar to help with the resistance there under the watchful eye of Null ARC A’den. Etain is on Qiilura helping with the removal of colonists on the Gurlanin homeworld, having been sent there by Skirata to hide her pregnancy. Meanwhile, Skirata, Ordo, and Mereel are on the hunt for Chief Kaminoan Scientist Ko Sai after she slipped away into hiding. Agent Besany Wennen trawls through government information looking for leads on just what the future holds for the Grand Army of the Republic.

With four hotspots of action, there are at least one point of view per place. Having been introduced to him in Triple Zero, we get to explore Vau from his point of view. It’s mostly seeing just how similar he and Skirata are in their core values but showing how their different approaches still achieve similar results. After busting a gut to rescue him, Skirata is dumbfounded at just how much wealth the Vau family has – all now within the sack Vau had with him. This starts off the two finally putting aside their differences. That, and the growing hate they share of the Republic – which is something shown very well here.

Skirata and Ordo are back with viewpoints, as are Darman and Etain. Skirata’s ever growing need to provide for his boys
now includes Etain again after the angered exchange the two had at the end of Triple Zero when Etain had mentioned her pregnancy. Things are on much friendlier ground with the two of them after a few months of being separated and the solid irreversible change that the baby is. Etain is still struggling with her emotions, with her hormones making that struggle even worse.

Jusik doesn’t get a viewpoint, but he is a vital part of this story as he plays both sides. After Mygeeto, Delta are put on the same mission that Skirata is pursuing – hunting Ko Sai. Not only does he go against orders and informs Skirata and co. exactly what’s going on, he also slows Delta down to allow Skirata to capture the Kaminoan first. He does exactly what he feels is right, and that builds to what happens at the end. It also plays parallel with how Etain feels, but she goes about it in a different way despite the fact she now has more to lose.

Sev is our view of Delta, and it is from his viewpoint how we see that Vau’s methods of training soldiers probably aren’t the best. Mygeeto rests heavy with Sev as he feels they failed Vau. That constant need to be perfect is strong with them all, and they all have to be feeling the failure in some way. That focuses them on the next job at hand, but maybe it’s just Sev who also feels that he would never be able to look at Vau without feeling guilty and radiating that failure like a beacon.

The end is quite raw feeling for all involved, as it speaks to the injustice of the system. The assault on Gaftikar ends early for Omega when an explosion rips through a building and puts Fi in a coma. Omega do everything they could, Skirata bends a lot of rules, but in the end Fi is officially dead. Unofficially, he is being Jedi mind-healed by Jusik until he breaks out of the coma in the back room of Captain Jaller Obrim’s residence. It hurts for everyone because it is someone they know. Because it speaks to what they all know. That the Republic isn’t worth it.

Mandalore is explored in this book, giving us a look at the base of operations of Skirata’s extended family that is currently under construction with its finishing touches. Mandalore becomes important in the next two books, so having the introduction here is worth it to see the bastion grow as a home and explore the wider world of Mandalore.

True Colours explores the darker side of the Republic that becomes very important when hitting Order 66, as that gives an interesting take on the events that happen during the period of Revenge of the Sith. That’s for the next review though, with True Colours exploring a lot, with many great interactions between the characters and the world, and making the necessary preparations for a whole lot of growth to this story.