During my porting of content to the archive, I came across a few posts that were like reviews, but I felt couldn't really be classified as such. I decided to make a new classification in which to fit them, but since I was planning on starting a new series for more informal reviews anyway, this gives me a great time to start Moonlit Critbit.

This series is where I’ll be giving an informal look at games, films, and TV that aren’t part of any other series [so A Look Inside the Morphing Grid covering Power Rangers]. One of the previous posts I now tag as a Moonlit Critbit is The Series of Ice Age – where I looked at the characterisation in the first two and how it works in the story. I didn’t do the same with the third and fourth films as I hadn’t got around to watching them, and that post was very spur of the moment. 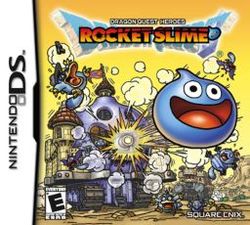 Anyway, that’s the past and this is the present. And the present gives us Dragon Quest Heroes: Rocket Slime. A spin-off to the Dragon Quest series, the Japanese series of Slime MoriMori started life on the GBA in 2003. A third game in the series hit the 3DS in 2011, which brings us to the second. Originally released in Japan in 2005, the second game is the only one to have been localised – in North America only – a year later.

My experience with the game didn’t come until I would think 2008, when DS flashcarts were all the rage. Now, don’t think I was one of those people who grabbed anything and everything available. Aside from Harvest Moon, this was the only other game I had on it. Which is funny really, as having both of these games introduced me to their respective series, of which I now own a fair few games from each.

As for the game itself, there was one element I absolutely loved from it. The tank battles. See, the story itself was a fun one – with a band of enemies from the Dragon Quest series being involved in an organisation called the Plob who kidnap an entire village of various slimes – more for the characters involved and the various interactions they had. It never took itself seriously [even in the final chapter], and I loved it for that, but the tank battles were the main reason I loved this game. 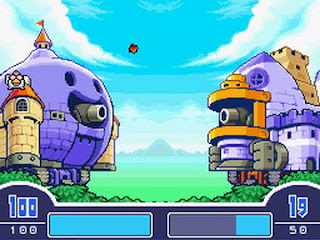 At the start, it would just be your slime against crews of up to four in another tank – which were all shaped differently. Some would be designed like the Plob member you faced while others would be based on something related to that member. But the starting screen of these battles would give the name of the tank and a tagline for that tank, all of which had a certain charm about them. One such being The Pyramaniac – Doesn’t Fight Pharaoh.

Then there were the battles themselves, in which each tank had two cannons that ammo would be fired out of. You’d find the ammo from one of three dispensing areas and launch it from those cannons. The ammo was varied, having different damage values and some having other effects. Since there’s a lower and higher path for the ammo to fly to the other tank, it gave strategy in what you would use where. Shields were useful for blocking a few items while also allowing you to keep the heavier hitting stuff behind it and hoping for it to land.

Once a tank hit zero HP, it would then be time for a trip into the other tank to attack the heart of it [which was a literal heart] and win the battle. Once you unlocked the ability to have crew members yourself, it opened up more options for battle, as crew members had two commands you could switch between. You could either have them deal with the cannons and distract the enemy, or get some of your crew to distract the enemy while you dealt with the cannons. If you so desired, you could even fire your crew into those cannons, with some having commands that were useful when you did so. 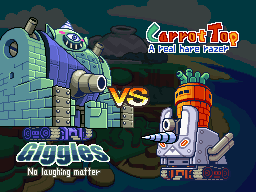 It was always fun to get to a tank battle and fight it out, swapping ammo and crew members to see what worked best. Eventually you could even start gaining the ability to use the various enemies you capture in the adventure as crew members – all with their own unique set of commands. Once all the members of the village have been rescued, a tank battle tournament opens, where everything learnt about tank battles in the adventure gets used in four ranks of the tournament ladder.

For the time, the game was something fun, and it still is to this day. The main adventure might be easy, but it’s the tank battles that are the main feature this time around I feel. Everything in the game is built around them, and it’s just a shame that the third Slime MoriMori game never got localised, as that one featured a world spanning adventure in ships – with all the mechanics of the tank battles being present for the ship battles.