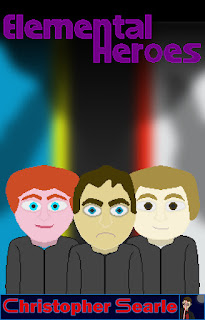 The third novel starts off a new series, based in a cyber world using video game logic. On the Kindle store for £2.70, the previews should have given a good idea of what this is about. The basic story of good vs evil, filled with character, action, and a number of references to a certain franchise.
There's something satisfying about reworking the basics of an idea into something that can be published, and this is one of those ideas. From the beginnings of nothing more than a Powerpoint with a bunch of short scenarios that barely linked to what has become seven episodes of an interlinked arc. A few ideas have been kept, but others were either changed or scrapped [one short scenario featured a competition between members of the force to win a holiday for two - and I can only guess twelve-year-old me was writing this on a Saturday night where such game shows are common]. I'm not going to go deeper into the changes I made, since this has only just released, but there will be a post in the future that covers such differences.

Since the third is done, it's onto the fourth. Space Race Championship. Yes, it's being announced now, purely because a preview is already out in the wilds from 2012, but mostly because a preview was ready to be added to the back of this book. The preview deals with the same thing as that 2012 preview, but has been rewritten to take into account the changes the story is going through. Space Race Championship features the titular event coming round again, and this year is sure to be the best one ever for two friends, who have entered into it. Space-faring action and the opportunity to explore another world. This time, I have learnt lessons, so there is no time-frame for release at the minute, but as soon as new previews start appearing, that will be the time to look out for a release. I will say that I am hoping to target this year.

Elemental Heroes can be found here - Kindle Store - with the opportunity to read through most of the first episode in the preview. As ever, I welcome feedback, and I hope you enjoy.
Happy reading.
Posted by Christopher Searle at 11:41
Email ThisBlogThis!Share to TwitterShare to FacebookShare to Pinterest
Labels: Elemental Heroes, network, Stories
Newer Post Older Post Home