Future of Mario Kart - Refresh of the Grand Prix [Gaming]

Mario Kart as a series has had numerous features. Double Dash introduced numerous features that haven’t returned in any other game, such as two racers per kart and the All-Cup Tour. Missions from MKDS returned in the form of online challenges in MKWii, but haven’t returned since. The latest features appear to be mainstays of the series, and considering gliders, underwater racing, and anti-gravity affect how the tracks work, removing such features would only be limiting returning tracks that use such features. The one thing that has stayed the same is the way the Grand Prix mode works. Aside from SNES and GBA games, it has always been 16 tracks, with 16 reworked retro tracks having been added since MKDS for a total of 32. Within this post will be two ways to rework the Grand Prix mode to give it a bit of a refresh.

The first is changing the way tracks are displayed, and borrows heavily from a little known infamous Wii game called Wheelspin. The idea behind how tracks were displayed in that game was simple. It was a triangle set-up, with ten tracks per triangle. With the next Mario Kart, the same principle could be applied – four cups with ten tracks within each. There would also be a bit of choice in how you approached the tracks within a cup. The first four tracks would be unlocked from the start. Completing two tracks that make up the lower points of the smaller triangle unlocks the track that makes the top point. On the below image, that would mean completing Mario Kart Stadium and Water Park would unlock Shy Guy Falls. In terms of actual points tallying, each track would only be able to be completed once when that cup is started. Once all ten tracks are completed the total points are tallied and a record of that is displayed on screen. The cup can then be restarted, but all tracks would remain unlocked to try in any order. This increases the amount of tracks in the base game by eight, giving four more retro tracks to choose from. If you’ve read the previous entry in this series, you’ll know that the list of tracks that haven’t returned is running low for some of the games. As such, for this revised Grand Prix mode, that rule is out. After all, as was already stated, only one track is available for use in the N64 game, and similar stories are happening for both the GCN and DS within two games. 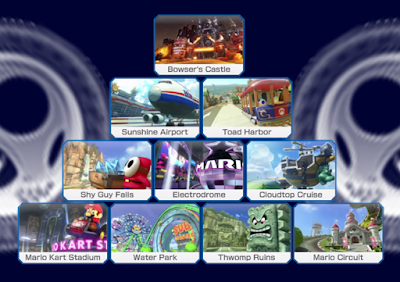 For the second way to rework the Grand Prix mode – remove the cups altogether. Think of it this way – there’s a map that features all the tracks. The four classes act as the cups, which work as seasons as you start on the first track and end on the last with the other 30 randomised in order. Mirror mode is available on all classes and acts as an extra challenge. Just as with the other idea, the progress per challenge is saved, so there’s no rush to get through it all at once. Having the classes take the form of the cups fixes a problem with recent games – which is that anything below 150cc has become redundant to most players. Yes, forcing them to go through the lower speed classes might not be the best thing, but it serves as a way to bring progression back into the series. With Mario Kart 7, characters were unlocked only in 150cc cups, and with Mario Kart 8 it didn’t even matter which speed class you raced in as a character unlocked after every cup win. However, 8 Deluxe had all characters unlocked from the start, so progression isn’t so much about the characters any more. Unless they were actually able to be kept as a surprise. With the way this is set out, it allows for two multiplayer modes. Free-mode – where tracks are freely available to choose – or set limit mode. This allows customisation of a season to play from three tracks to the full 32, but they will always be bookended by the first and last tracks of the roster. As for any download content, within Grand Prix mode they are separate on first run, but after will be mixed in with the regular roster. For multiplayer they are available from the start.

Now, I don’t mind the current format, but I do know that a refresh allows for new ideas to be brought in and give a fresh take on the current formula. Mario Kart has always expanded its feature set in other ways, but hasn’t ever touched the way tracks are presented aside from adding more. These are just two ideas for doing so, but I’ve seen plenty asking for it to go the Crash Team Racing or Diddy Kong Racing route of having open-ended maps to explore with themed areas. I feel Mario Kart should stay away from that and leave it for another Nintendo racing IP to tackle. Next time, I’ll be talking about other features. Whether expanding on current ones or bringing in a few new.

Future of Mario Kart Series
Retro Tracks Next in Line / Refresh of the Grand Prix / Refreshing Additions of the Feature Base / Characters Come Together for Chaotic Crashes / Crossing Over for Crossovers / Casting in the Wilds for New Locations
Posted by Christopher Searle at 22:22
Email ThisBlogThis!Share to TwitterShare to FacebookShare to Pinterest
Labels: Future of Mario Kart, gaming, ideas
Newer Post Older Post Home