The Alternate Adventures of Halesowen Has Released [Network] 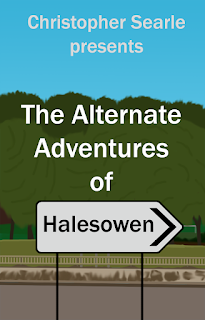 Yes, my first book has been published to the Kindle Store. The short story compilation comes in at 93 pages, and has a price tag of £2.50 [though that will probably be reduced soon]. If you have Kindle Unlimited, it can be borrowed for free, but borrow or buy you will be helping me.
As I've stated before, the idea to do this came from TV and Film Residential Camp - where I was using real names of real friends and other members of the group. As I was building that up, I wanted a full cast of original characters, while still borrowing elements from my experiences. All the stories are original though.

As this first book is out, I am exploring where these characters can go next. First will be a slight retread of events here, as well as more focus on Daniel, as TV and Film Residential Camp gets expanded on. The main plot points will still be the same, but I will be cutting some parts out to make way for new elements within the story. Without giving too much away, both visits to the camp will be expanded on, and the middle section will have a much clearer focus.
Away from that, more focus will be put on plot developments, and shorten the focus from the whole group within one novel to just a few. You won't get those stories until after I start some other series though, and I have two others in the works.

However, there are still things which can be posted from this book. Starting next month a new section will go on WattPad that will have some extras from this story on it. There was a lot of focus on the first story, which is the largest of the lot. The two main short films within it had planning go into them, so full scripts were referred to throughout. These will be added first, as though they were deleted scenes from the book during the film screenings. Then a few other extras will be added.

The Amazon search results will find the book using just 'Alternate Adventures', or for those in the UK use this link - Kindle Store - to get direct access. Enjoy the book, enjoy my future content, and I will have new posts on this blog very soon. There is a certain event happening next week, after all.
Posted by Christopher Searle at 15:57
Email ThisBlogThis!Share to TwitterShare to FacebookShare to Pinterest
Labels: Alternate Halesowen and Beyond, network, Stories
Newer Post Older Post Home