As I said in this month's Update, I was never an active watcher, and the point at which I started - Dino Thunder - was effectively The Force Awakens to A New Hope. Familiar with its concepts but presenting them in a new approach. From an evil Ranger who turns good, the comic relief trying to expose the Ranger's identities in numerous ways, and most importantly of all - Tommy Oliver returning as a core member of a team. So from someone who's first experience into Power Rangers was from Dino Thunder, what kind of opinion would that one get watching the original? 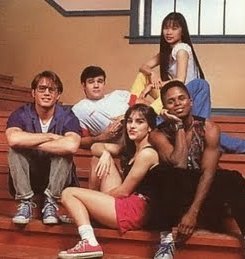 I can say it certainly is a positive one. The core five introduced to us are an interesting bunch, and carry the episodes well. Jason - the martial artist, Billy - the computer geek, Trini - all-round good girl, Zack - dancer and romantic, and Kimberly - athletic gymnast. From the first episode - Day of the Dumpster - it is clear that each possess different qualities and that each helps the others in their own way. Throughout the first few episodes, I found myself enjoying what each had to offer to the episodes. Even Bulk and Skull had entertaining scenes, and bounced off the main five well. Rita Repulsa and Goldar make for good commanders of the villains. Then we get to our sixth main - Tommy Oliver. His introduction rolls off good, with him acting kind and thoughtful, then rude once he gets turned evil. Five episodes to tell this entire story was about right, though I feel it might have done better with just four. The arc occasionally felt stretched, though I do give credit for pacing it mostly right and giving the sense of defeat and despair that lingers through most of the arc.
I also have to say this, though I can understand why they did so. Once Tommy is a part of the team, it feels that the writers needed him to be out of the action so created numerous ways of doing so - some of which not working as well as others. It comes down to using the Super Sentai footage for all morphed fight scenes, which is restricting in most cases. I seriously wouldn't want that to change though, as it works for the required purpose.
Over the course of numerous episodes, the stakes get raised, and once we reach The Green Candle it is clear we are nearing the end. Or we would, if the proposed ending had indeed happened. The seriousness mixed with light-heartedness is back as Tommy begins to lose his powers. In a highlight of season one, we see Tommy battle Goldar without his powers, then Jason in the second part. It certainly showed their dedication to the team and stopping evil. In a moment that had certainly been built up to, Tommy and Kimberly share a kiss in the final moments of the episode. With Tommy no longer a Ranger, he disappears. It's a small thing, but while the world building is certainly there, the disappearance of characters when no longer needed is jarring. It's also not dealt with very well, as season two demonstrates [though understandable why it happened].
As the proposed end comes to a close, I'm left wondering how the series deals with continuing. And Doomsday does feel like an ending. High stakes, what with the population being sent to the Dark Dimension and Rita's palace landing on Earth. The battles taking place feel like an ending, and then we get what feels like an ending when Rita retreats and the population is returned. The whole Power Ranger day also feels like an ending. It doesn't end the season though, and instead we get more episodes. It's a plus, but considering how many episodes Mighty Morphin' eventually becomes, the episode count of each season could have been reordered later down the line. 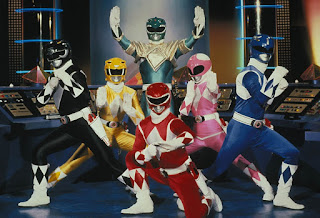 Once Doomsday is over, numerous episodes play out as they did before the supposed finale. There's a light-hearted feel to all of them that works well with the episodes. Only when we get to Return of an Old Friend do the stakes get raised again. And Tommy is the one who returns. With temporary Green Ranger powers, and the Zyu2 footage, Tommy is able to be a part of the main team, rather than backup. This part of season one also started the lyrical background songs being played during fights. It did work for the most part, as the songs were good to listen to, but they also would sometimes have me zoning out of the action.
The end of season one and beginning of season two merge almost seamlessly, with An Oyster Stew providing yet another failure of Rita's before Lord Zedd arrives to take charge. The arrival of Zedd brings a bit more menace to the villain side despite, as we see throughout the season, the ease of which the new Putty Patrollers are dispatched. As the episode Mutiny shows, they are not exactly the best foot soldiers to have. With the Rangers taking care of them in sight of Bulk and Skull, the two comic relief characters now have a new goal. Exposing who the Rangers really are. As the three-part arc continues, more powerful zords are created to tackle the stronger monsters Zedd creates, and so the Thunderzords are in on the action. With the Thunderzords being part of a new season of Super Sentai, there is no sixth zord, so Tommy misses out. Also being a new season of Sentai, yet Rangers still using Zyu2 footage, meant a mixing of footage for all zord fights. As such, throughout the first half of the season, I felt the zord fights were the weakest parts of all episodes. What also didn't help was the extended zord calling and fusion to the Megazord footage being used in all episodes, even after the mixing of footage stopped.
Zedd learns how hard it is for the Rangers to be defeated, and season two works its way to being a mix of better and worse. Zedd's plans are the same as what we saw with Rita, and are still as strong in character and fight scenes. Then the zord fight proceeds to just be tiresome. Green No More livens things up by finally erasing the Green Ranger power. Despair is back as it looks like all Rangers lose their powers for good, and Angel Grove is getting taken over by evil. Tommy proves to be the best yet again as he doesn't fall for Goldar's taunting that he is weak, and battles yet again without his powers. With his powers now gone, Tommy makes one last stand and enters the otherworld, destroying the crystal holding the Ranger powers. Now at full strength, the Rangers conquer evil and win yet again.
For the next few episodes, we get focus on characters feeling bad about Tommy's departure, with the next episode trying to repeat what caused Tommy's downfall with the other Rangers. We don't have long for Tommy's return, as there are only three episodes between Green No More and White Light. With Part 1 of White Light, Zordon and Alpha shut the command centre down to start on a secret project - without alerting the Rangers they'll be on their own for a while. When they do get called back in Part 2, they have already suffered a defeat. In a reveal that probably surprised no-one when the episode first aired, Tommy is the new White Ranger. Kimberly sure got a shock from it though, passing out as the helmet was being lifted. With Tommy now the leader of the team, the Rangers win the day again. 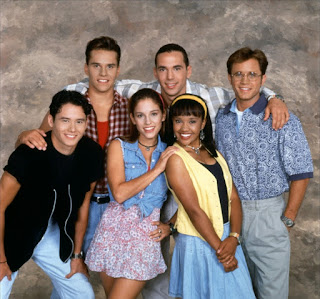 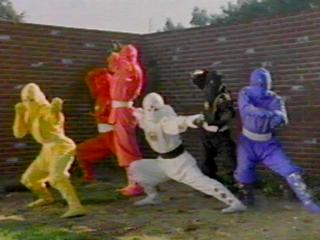 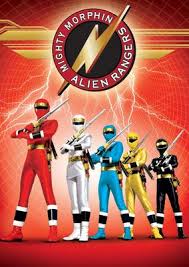 This look at the series has gone on massively long, but with a running total of 155 episodes, it is to be expected. Thankfully no other series of Power Rangers goes on for that amount of time - even two together - so from now on these should be reduced in size. As for how I view this series as a whole, it's certainly enjoyable at first. That enjoyment stays throughout the series, but despite swapping characters, suits, villains, zords, and changing up the weaponry used, there are many points later in the series that suffer from a been here, done that feel. As for referring back to what I said at the beginning, watching this series has certainly made me appreciate Dino Thunder all the more, and I can respect this series for starting the legacy of the Rangers.
Next up in this series is looking at both Zeo and Turbo. That's all for now, so bye for now.
Posted by Christopher Searle at 17:24
Email ThisBlogThis!Share to TwitterShare to FacebookShare to Pinterest
Labels: A Look Inside the Morphing Grid, Power Rangers, TV&Film
Newer Post Older Post Home