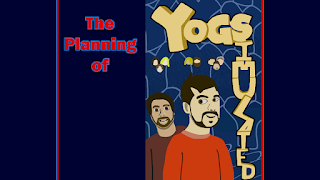 Exactly two months ago, I posted a fan-created story to Wattpad that put focus onto a well-known entertainment brand. Yogsimulated told the tale of ten members of the Yogscast getting to experience a new type of virtual reality and be the ones to make it public through the use of a video. Each of the four points of view explored the same events but with different experiences being felt.

And now, with this post, I’m going to give a bit of a behind the scenes look at what sort of ideas I had planned for, and why the things that went into it happened. If you haven’t read it yet and want to do so before reading this look back at its creation, you can do so by following this link. Now, let’s start at the beginning.

The time was around this point last year. The Jingle Jam of 2018 had finished, I’d been watching some of the regular streams over the month, and wanted to celebrate my appreciation of the Yogscast in the way I knew best. But what could I use as a story? Did I want to go wild with it or play it safe?

I eventually opted for the latter, but used a bit of creative licence when crafting the characters. All of that came in the last few months before release, however, since for most of the year it was just small bits of ideas that never really got put down in writing. The only thing I had really settled on was – as with all my fan-created works – an alternate reality that allowed me to be a bit more creative with the world.

So to start with I had a list of various members who could be used in whatever story happened to uncover. That list was always changing and evolving, and at one point I had considered adding original characters into the ‘cast – though I felt doing so wasn’t in the spirit of what I wanted this to be about. Then there were the events I wanted to happen. I had considered taking the ‘cast on an adventure of some sort, so for the first few months the label of Yogventures was applied to the folder of ideas.

Such adventures were to have referenced a few things from the then recent videos I had watched, though such ideas had never been put into data form. I just knew I wanted an adventure to happen. But then I started to think on something I like to say, and decided to theme the adventure around that. “Adventure can be found in your hometown” was something of a phrase I’d say near the summer, as I would sometimes just head out with end goal in mind. So with the Yogscast being based in Bristol, the adventure of Bristol started forming, with wacky antics being had as they travelled around.

That idea lasted a few weeks before I then decided on a new angle. Now in the second half of the year, the Jingle Jam would soon be returning for another December of festive-themed charity streams. I wanted something that would tie in – however loosely – with that event. So, what with the alternate reality in mind, I uprooted something from Elemental Heroes for use here. That being the virtual reality that was pretty much an alternate reality. A video game environment where you controlled every action you made.

The idea was that they had been invited by the inventor of the technology to be the ones to make it public. As for what they were doing within the virtual Bristol, I at first flavoured it as a Gmod-like experience, with game modes similar to those the Yogscast have played on the main channel. Rather than transferring them completely over, I started to develop similar modes to fill in for them. Only infiltration – the TTT-like mode – ever had ideas written down for it.

Infiltration would have been an objective mode, where the team have a goal that needs to be completed. However, there are infiltrators who aim to stop that goal being completed by killing the other members of the team. For every five players, one would be an infiltrator. Everyone would have a role which determined which weapons they had access to, independent of whether they were an infiltrator. The game would have been played with full communication off, which would have made for a more plot-focused section of the story rather than being character interaction based.

Then I added some racing to the ideas of games that would be played in the virtual reality, and since my heart lies with racing, that’s what the entire story became based around. Not only did it allow for character interaction to be at the fore of the story, it allowed for an expression of just how much could be got away with in this virtual reality. You’re not going to be able to zoom around the city streets without repercussions in reality, after all, and that’s something I made sure to highlight within the story, along with a few extra bits about the morality of actions even in a virtual world.

The list of characters had been finalised and I got to writing. The first pass at it needed some strengthening in certain areas. The introduction felt weak, and there was little in the way of true interaction. There also needed to be some world building and explanation of the systems at play within this virtual world. The second pass made sure to correct that weakness, adding in the world building elements, while still keeping it all told from Lewis’ point of view.

Now, truth be told, it could have ended there, ready to be uploaded to Shorts of the Rula in November. But if this was a celebration, I wanted it done right. There were four groups in the introduction, and so another three points of view were written. Doing so allowed me to include the three journeys in the first half that would never have been told, along with some more world building opportunities. I could also put some focus to areas that wouldn’t have seen much under just the one point of view. Working on those other three POVs brought to light a few corrections and additions I made to the overall story.

Looking on what was created, I felt it managed to convey the usual banter and interaction that videos of the Yogscast have, but aside from the world building of the virtual reality technology, doesn’t stand as a massively strong story. It was something made by a fan to celebrate their appreciation of a brand. In this case, the Yogscast. And it does do that, but I’m left wondering what I could have achieved had I kept the larger ambition for the project I’d had at the start. Video content is what we love the Yogscast for, but – while certainly a unique take – doesn’t mean a story written about them has to follow that core foundation.

That game mode of Infiltration I have kept as an idea for another time. It won’t see anything major done with it, but it serves its use as a world building tool – whether for a continuation of this story (since I could theoretically make a second story based on the livestream during Jingle Jam I reference in the first) or for another of my worlds as a mode within a standard game.

What I do want to try is a story that takes those original ideas of an adventure and make something of them. If I feel the opportunity is there to make another fan-created story using the brand of the Yogscast, I will try to incorporate those ideas into such a story. I’d want such a story to have something unique to it, though, so will only use such ideas in such a way if it makes sense for what I want to achieve.

While what I said above does make it seem like I am disappointed in how this came out, I am anything but. As said, it managed to convey the banter and interaction videos of the Yogscast have, and that was what I set out to achieve once I had a goal in mind. I’ll leave it up to you to see if I managed to succeed at that, but I feel it has.
Posted by Christopher Searle at 19:26
Email ThisBlogThis!Share to TwitterShare to FacebookShare to Pinterest
Labels: Look Back Look Ahead, network, Stories, Yogscast