Creating a New State Within the GTA-verse 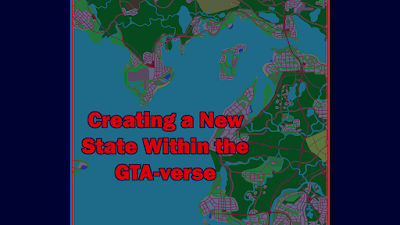 The GTA series has been based in America since its inception (with one London-based exception), but the locations have always seen a complete overhaul from one era to the next. Los Santos and the greater state of San Andreas, Vice City, and Liberty City have been the three main locales whenever a new GTA comes along. There are others that appear, such as Alderney and Anywhere City, but you won’t find them filling out an entire game (other than Anywhere City, but since GTA 1 featured all three locales in one game it was expected they’d try something different).

However, while many would want to see an HD revamp of Vice City (perhaps even extending it out to include more of south Florida), I feel the time is right to try something new. A completely new location offering completely new opportunities for exploration of not only a location, but story, world building, and the references to real world experiences. With the rumours and leaks, it seems both are happening, and I made a rendition of the Project Americas stuff previously. This time the detail is much greater as I launch into detailing how I would go about making a GTA-verse Michigan.

From that map above you can already see the detail I’ve gone into, mapping out roads and features of the land. I’ve included as much as I possibly could to represent what I’m talking about, but I will make this clear. What you see is not perfectly accurate in the scale of size. Despite going into detail, the aim was never about going for perfect accuracy with this. It just needed to be good enough to represent everything I wanted to go into it. The train stations are perhaps the weakest part of the entire thing, but it gives a decent enough idea of what I’m going for with them.

I chose Michigan as it allows something that hasn’t been done before. As well as being an interesting shape, it also enables variety in conditions. It might seem a bit unfair to do so, but the Upper Peninsula sees a lot of snowfall during the year, which means around half of the map would be in permanent snowy conditions. But then, if you have the snow, you may as well use it, which brings me to another thing that hasn’t been done before. Ski resorts. We already have playable golf, there’s been bowling, and numerous other activities, but the locations we’ve been to previously have all been sunny and not really fitting for skiing. Not only does Michigan bring with it a getaway from those sunny climes, it also brings with it one of the most nature-based states of the US.

And that can be seen from the map. I’ve exaggerated the size of all on-land water to give a greater idea of what I’m picturing. Michigan has the most lakes of any state, and that gets represented here. It has the most national parks and protected land of any state, which also sees representation. There’s plenty of rivers, a lot of hilly terrain on the Upper Peninsula (and some on the Lower), and despite not being represented to great effect on the map, there’s also marshes and dunes. I’ve leaned into this natural looking state a lot, as though it can’t be seen everywhere, even the towns and cities have natural parts to them – with some even being very close to the forests.

As for those towns, there’s one very obvious omission from the state. Detroit. The largest city within Michigan. The most populous states are usually those that Rockstar tend to go with when creating these locations, with Los Angeles, Miami, and New York City being the largest cities of California, Florida, and New York respectively. To fit in with the idea of a natural state – and because it could be seen as too similar to Liberty City – I decided to go with the second largest instead. Grand Rapids is the furniture capital of America, which allows for some ideas of missions. As does some of the media set or based within it (30 Minutes or Less and the American Pie series being the notable ones). Such knowledge can also be used for secrets and Easter Eggs within the world. However, that sort of detail is not going to be talked about here.

As stated, I chose Grand Rapids more for fitting the natural theming I was going for rather than any history or fame it has. For this city, I merged Walker, Grandville, Kentwood, and Wyoming into Grand Rapids for a city that fills a large portion of the south. Bordering the city are Northview to the north-east and east, Ludington to the north-west, South Haven to the south-west and Plainwell to the south. Strange choices, in some respect, as only Northview borders Grand Rapids in reality.

The idea behind those on the west was to allows for ports nearby the city (though I imagine there’d be a port somewhere within it), with Plainwell being used just to fill out that area with a town – though I do admit to liking some of the layout it presented and wanted to include it. Plenty of other towns fill out the east that serve little in the way of importance, so I won’t be naming them. There are farming communities on the east of the Lower Peninsula, which offer a change from the mostly forested terrain. Traverse City (along with Northport) and Mackinaw City make up the other two larger communities on the Lower Peninsula.

As for the Upper Peninsula, there’s the ski resort mentioned before (I had debated whether two could be included, but felt one was enough), as well as two mines/quarries in the central third. The largest communities here are Escanaba, Manistique, and Sault Sainte Marie. Crystal Falls could be considered a fourth large community, and though it does look as though there’s a large community to the west of the mountain, it’s two small towns based on Wakefield and Watersmeet. There’s very little in the way of division between them, and that’s why I say that the map is not representative of how it would truly look.

The Upper Peninsula is also a very interesting shape, and I wanted to try as best as possible to replicate the uniqueness of it. Since most of the west side is attached to Wisconsin in reality, there had to be a feeling of a natural shore being attached to it which is easy enough to create, using the towns featured to shape that land instead of relying too much on the border line. I also wanted to keep as much of the Lower Peninsula’s mitten-like shape as possible. And you can see the shape is present, except for the south-west portion being completely removed. As I said, I didn’t want to use Detroit within this state, but I’m not going to act like it has no relevance for the state. The rest of the Metro Detroit area not featured would be contained on a separate island within that area.

The state of Michigan consists of numerous large islands, and though it would be foolish to represent them all, I have included a few that offer distinct differences from each other. These islands would serve little in the way of main story relevance (maybe), offering more terrain and more places to visit for the side missions and other activities. I’ve also taken a bit of a stretch with some of them, basing them on nearby landmasses not attached to the state of Michigan. It might be wrong to do so when this is purely a state based on Michigan, but it fills out a bit more of what otherwise would be large portions of ocean.

And while I might not want to go into detail here about the story that might play out, I have been thinking about things could be done with it. Such as the beginning of the story seeing a near-complete idea in the form of an addition to Shorts of the Rula. Mountainous Change has the start of this story on the slopes of that ski resort, just so it can be included from the story from the off (though you won’t be getting back there for some time). There’s also a few in-universe names for places within the story, showing the amount of planning that has gone into the creation of the world. There’s also lifting the businesses stuff from GTA V’s Online and bringing them into the story, which serve as both story progression and optional extra missions.

This basic overview was to give my ideas for how a GTA-verse Michigan would be done, and there’s more I could go into detail about the locations I’ve included. But that would probably double the length of this post with details that would seem minor to most. Just know that I had at least three other versions of the map before this one that included different locations across them, along with a different look for the map layout and ideas for representing the islands. Only the main city remained consistent across all versions. And while larger can be seen as better, I do think there would be a way to shrink the amount of locations down while still remaining true to my vision.

You have the map and the initial thoughts of it, so why not say what you think of the ideas presented? Sure, it might seem like it goes against all that GTA stands for, but that’s only because on first impressions it is different to what you would expect. After all, who would expect Michigan to be considered for a game whose main theme is turf wars between criminal gangs? But the most unexpected can sometimes bring about the greatest of experiences.
Posted by Christopher Searle at 18:09
Email ThisBlogThis!Share to TwitterShare to FacebookShare to Pinterest
Labels: gaming, GTA, ideas