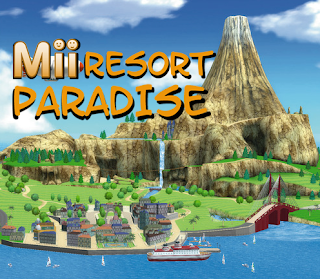 In the first quarter of 2015, I outlined an idea relating to Wuhu Island – the sports haven of Miis featured in Wii Sports Resort [though it first appeared in Wii Fit]. Since Wii Sports Resort, it has featured in Pilotwings Resort, future Wii Fit games, and even got some representation in Mario Kart and Super Smash Bros., but while Nintendo in recent years seems to have forgotten the island except for the occasional referencing, I’ve been planning an expansion.

That idea I mentioned would put all the sports from Wii Sports Resort into a new game with a fully explorable Wuhu Island where you could naturally head to locations to access the sports, though you’d have the option to access them all through a menu in the hotel lobby if you so wished. New sports would also be added, with the ability to freely fly without restriction and drive a kart around the island.

In 2016 I revisited the concept, but as it was part of a larger post detailing my ideas for Switch games, I didn’t spend much time on it. I had got a much better idea of just what I wanted it to be, and that was a hub for interactivity. While I didn’t mention such a thing within that post, there was a mention of expansion and always including new things to do. It’s certainly sounding like a GTA Online clone set on Wuhu Island, but that’s not what I want it to be.

I still want this to be a more casual experience, and I’m basing these ideas from a game I played last year, which has helped refine the experience that I want Mii Resort Paradise to be. That game is Go Vacation – which was originally released on the Wii, having released two years after Wii Sports Resort. With it now on the Switch, I took more notice of it, played it, enjoyed it, and keep coming back to it. But it still feels like a Wii game, and Mii Resort Paradise is about making a similar experience be the best it can possibly be.

First, though, Wuhu Island itself needs some work. It’s been great to explore it across these various games, but it does have a problem in terms of scale. The cars are oversized monsters and so are the buildings. Then there’s the ruins, which could be a really great area to explore, but are much too small to really do anything with them. Rebuilding the island to be a properly scaled world, expanding on that ruins area – and especially allowing it some way to connect to the underground tunnels, as well as adding new places to explore or that relate to the new game additions.

I also want to see Wedge Island properly represented in the world with all eighteen holes of the golf course featured. Sure, that could be considered overkill, but it allows for more map space, and as such allows for more exploration opportunities. And race routes, but we’ll get to that soon. As well as seeing all eighteen holes there, it also seems like it would be a good place to put the baseball stadium.

Yes, as well as those from Wii Sports Resort, I also want to put the original sports that were cut from Resort back into the roster. Tennis courts already exist at the Cocoba Hotel, and one of the buildings within the town can be repurposed as a boxing arena, but baseball has nowhere to really be put, and Wedge Island really needs more than just golf as an attraction.

As for new sports, there’s numerous places to climb, so rock climbing would be one addition that – while not the most action-packed of sports – allows for a technical approach to a control scheme. There’s also borrowing from Mario Kart slightly in having kart races, though you wouldn’t have any powerups to use. The power cruising and air sports events would also get some classic races to do as well. And speaking of air sports, Island Flyover would get a rebrand. Since there’s no need for the way Sports Resort does things – it would instead take a more Pilotwings approach. I think you can see what I’m doing here.

Yes, there’s a number of games from Nintendo that haven’t really seen a new addition for ages. Whether they just don’t want to commit to the series or have no idea how to make things fresh (though with how long some of them haven’t seen a new entry, I think you could consider them fresh just by having a new release), I can’t really say. What I do know is that Mii Resort Paradise can be a testing ground for getting those concepts from various series back into the public eye. The trick is not to create full games within a game with these concepts.

As for the other events within the game, there’s plenty of scope to add new places for them to be set up. Take Showdown, where it has plenty of routes to get through already. With the expansion to the island, it gives the opportunity to create new routes to fight through – including one across the golf course of Wedge Island. The same can be done for other events such as cycling and archery. There’s even scope to add a triathlon out of the various events, with each stage being three of the different sports.

The open world of Wuhu Island can indeed be fully explored on foot. However, to get around faster, you can visit a vehicle stop to get something to ride if you wanted. Available are a kart, a jetski, and a plane at points where it makes sense for them to appear. While on foot, you can also free-climb up the rock faces and other surfaces. This will come in handy for one of the other reasons why Island Flyover has been changed.

Within the world are flags to collect, and these can be found all over the map. They work the same as the information points that you’d collect in Island Flyover, where finding a certain amount would grant you an extra something within the world. This time, though, they give you extra customisation options. And with the expansion of the world, there are more of them available to find. You have to be on foot to claim them, but the vehicles give you a helping hand to reach them.

That customisation mentioned is based on unlockables and purchasing. Playing events will earn you a small amount of money per event that can be used on basic options for everything. Much like in Sports Resort, each event would have stamps attached to it, and completing those challenges would unlock some special customisation options. All of this would be accessed from the hotel lobby, where changing what your Mii is wearing is the largest part of the customisation – including the outfits they wear during events. Vehicles can also be customised with new looks.

Now, this definitely won’t be any sort of money-grubbing scheme to get people to pay up real money because there’s an outfit they can’t afford. The system is designed to be reasonable and fair. There’re loads of options, and all at a fair price. Only the most exclusive of items would be touching a thousand, and there would be no grind to be earning money. Since the game allows for online play – both in the freeroam and in events – it’s just something to allow a little variety. And the earnings stay the same no matter which way you play.

Having a room to stay in has been scrapped, since it wouldn’t ever offer anything to the gameplay. But there’s still one more thing to be talking about, and that is expanding beyond what is in the base game. Free updates can offer new customisation options and new events or routes to play on, but what else can be offered? Entirely new things that use the island.

Think on it. The island is already there. Everything that can be done with it could realistically be added to Mii Resort Paradise. Want an action game or an RPG-lite set on the island where there’s a story and interaction with some of the NPCs around, even revealing some new lore about the island? Release it as an expansion to the game. Want a mystery game set within the hotel? Second expansion. Anything that can be done with the island that offers a major change to how you’d play could realistically be offered as a paid expansion. I’m unsure on whether such expansions should stay as solo and co-op only experiences, but as stated before, most of the multiplayer additions would be free.

Which also includes other events within the island freeroam. After all, once the flags are collected, you’d be exploring just for the sake of exploring. Special events can be added to the freeroam that offer money and possibly even extra unlockables. There’s even scope to be adding crossover events into the game through these special events. An obstacle course in the style of a Mario level, a maze based on a Legend of Zelda dungeon, even some of the smaller stuff like a dig site based on Fossil Fighters. And with those comes series-specific unlockables.

I’ve been talking enough about this for now, though. This is the most I’ve ever even dived into the concept, and I could continue to talk about everything I’d want to see in it and possibly even create a release schedule for everything that comes after the full game’s release – including what all that content included. For now, I will be stopping here. With a September Direct imminent, I once again hope that Nintendo have something like this in the pipeline for a reveal. Even if nothing like this is shown, I can still refine this concept to be the best it can be.
Posted by Christopher Searle at 20:14
Email ThisBlogThis!Share to TwitterShare to FacebookShare to Pinterest
Labels: gaming, ideas