I’ve been playing Smash since Melee, as my post about the series shows, and while I’ve loved them all, I’m no fighter. Not a serious one, anyway. Each of the games meant different things to me, which stops me from truly ranking them in any sort of order. With Ultimate, though, I think I have that favourite. 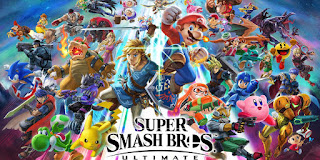 I’d started up with regular Smash, and instantly found that rulesets can be created and saved before getting into a match. Straight into Stamina Smash I go then. The presentation is slick and easy to navigate, and the matches themselves are fast and fluid without feeling too overwhelming. Well, most of the time.

It feels closer to Melee in the fighting, with the tightness that Brawl implemented and 4 refined. The control of fighters is also tight, with the ability to map them however you wish still being present. And speaking of refinement, you have the ability to choose which track you want to play at the stage select without forcing it to play through stopping the other tracks.

The big thing this game has is the Spirits mode. Building on the system that 4 introduced with the parts, and creating some very unique situational fights in which to get them. It also brings in tactical play beyond the fights themselves, as you collect and build a team of a primary and up to three supports that give advantages and increase your power and defence.

And you’ll need to be changing up to fit the fights and making sure those primaries are levelled as high as they can go for when you need to change them. Some of these fights can get pretty insane with the things they expect you to do, such as fighting a character with an assist trophy always active that will ruin your day if you aren’t careful, or floors with disadvantageous effects such as lava or sleep-inducing spore. Everything can be countered if you have the right combination of spirits, so checking what they can do is essential.

While the story itself is minimal beyond the set-up, it does feel like an adventure thanks to the expansive map. As you progress by beating spirits, more of the map opens up. Some spirits are needed for situational blocks – such as the boat that needs Kapp’n to use – though once you have the right spirit the game will alert you to that fact. The map itself also looks very pretty in the hand-drawn style, with a lot of diverse areas. 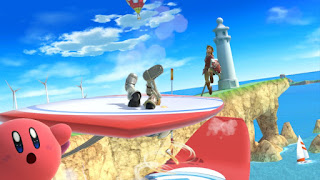 If you don’t want to go through World of Light, you still have access to the spirit fights through the spirit board, though unlike in World of Light a failure on the board is a one and done deal unless you have an item to restore that bounty. World of Light allows you as many tries as you want, so it’s probably better to start off with. I jumped straight to the board and managed to accrue a decent collection before starting World of Light.

Smash Bros. Ultimate really does feel the best of the lot, with a new training mode that allows testing in a lot more depth than before. The game itself has a lot to give, even if a few of the smaller modes are missing. The music is on top form as usual with the series, with the largest collection of music yet.

Overall, this is worth it, for both solo play and multiplayer. New fans can find something to like in this, with older fans sure to enjoy it for the great collection of stages and fighters it brings.
Posted by Christopher Searle at 20:39
Email ThisBlogThis!Share to TwitterShare to FacebookShare to Pinterest
Labels: gaming, Super Smash Bros.
Newer Post Older Post Home