As for why the series got cancelled, Imperial Commando: 501st originally released 27th October 2009. The Clone Wars completely rewrote Mandalorian history starting in season 2, which would have been known to all those working under the Star Wars name. As such, Karen Traviss left the series before the second Imperial Commando could start. It was said that the series would be given to a new author, but the series officially ended – as in cancelled – on July 2010. 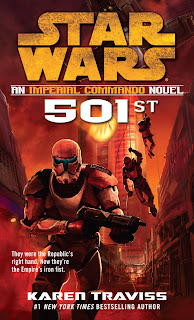 As for Imperial Commando: 501st, it starts by showing the sudden change the galaxy has gone through. Ny Vollen risks everything for two Jedi, knowing exactly what Kal wants with them – or at least one. Niner and Darman are coping with being in enemy territory in their own ways, now with a new purpose under the Imperial Special Forces unit. And life on Mandalore is getting tense with every new visitor that arrives.

The war has all but stopped, but there are plenty still on-going, and the search for Jedi has become a coping mechanism for the clones stuck in the Imperial regime. That is told through both Niner and Darman and the interactions they have with their work. There’s also Niner’s paranoia at being a leak to Mandalore, not helped when the Nulls manage to insert a secure link into his helmet.

There’s a few points-of-view that are new from characters seen before. Ny Vollen has been around since the Gaftikar mission, a contact of A’den’s who helped get a fellow ARC away from the planet. Now she is an outsider – just an associate, not even bound to the clan – staying for much the same reason as others have been pulled into it. It allows her to fit in somewhere with the galaxy. It has given her a new purpose, much the same as it did Besany Wennen, Laseema, and even Skirata’s own daughter. But she has never seen the more brutal side of Skirata, just the loving man of a whole clan.

Doctor Uthan had been abducted by Omega in Hard Contact and rescued by Skirata’s band in Order 66, and her point of view shows her feelings of both past and present. It is also just one viewpoint of many that feels written in a more everyday way. As though life is normal with only small problems to deal with. And it makes all the characters stand out in a way they haven’t done before.

There’s a lot going on here despite that though. The story feels as though it is setting up for a more personal war. Not a war waged on many battlefronts across the galaxy, but a war on a single planet with more than two sides. Unfortunately, things never got that far, but the ending of 501st still manages to be a nice end to the series.

Darman stayed behind even despite the Nulls coming for them as his war against Jedi is personal. He’s made it personal. His son is strong with the Force and if any Force-using sect were to ever get into power, he fears they would take Kad. Which is why when he hears the base on Mandalore is being occupied by Jedi – including his old commander – he goes off on one again. He and Niner finally decide to leave for Mandalore, but Niner doesn’t know exactly what Darman intends to do.

This one is a great read, dealing with new situations in a mature way. There’s a lot more going on than I’ve covered here, as while this is technically the last in the series, it also deals with a lot of set-up that would have gone into the new books, and I don’t really want to go into speculation territory with what could have been.

As an entire series, Republic Commando is a good one. It gives characters you can connect with. They have motivations and morals, and it explores areas hardly seen in the universe. Some might find the serious nature of it a bit off-putting, but for those who stick with it, it’s a series well worth reading.