After Hard Contact released in 2004, it was clear the series was just starting to get strong. In March 2005, a new Star Wars Insider released with a new story of Republic Commando – Omega Squad: Targets. This short story detailed a siege at a spaceport on Coruscant which Omega were called in to help with.

For the UK, the magazine was the only way to have read the story, though the US also got a second opportunity when Triple Zero released near the beginning of 2006. This second novel of the Republic Commando series introduced a lot more into the narrative of the overall series, and after the initial purchases of novels, this was my next addition. 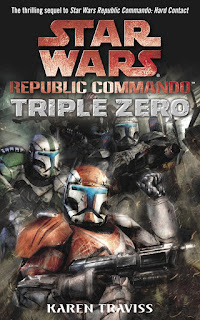 The first chapter properly introduces Kal Skirata – who we’d only heard about in the previous book. It does so by taking us back to his first encounter with the clones – specifically the Null ARCs – and how that affects him. This first chapter is very strong in showing how Kal reacts to the situation of eight years before Geonosis, and it has such an affect on him that it changes his outlook on the universe – as does the eight years of training over a hundred Republic Commandos. In fact, his outlook has changed so much – and seeing the effects of the war on his boys – that his motivations are pretty much solely focused on them.

It’s been a year since the outbreak of the war, and things are not looking great. Terror attacks are striking the heart of war operations on Coruscant, and it needs to be stopped. After a bit of trouble that reunites Omega with Etain – with both being formally introduced to Delta for the first time – they all head back to Coruscant with no idea they’ll be spending more than a few days there and will feel the pain upon living a different life for a few weeks.

While on Coruscant – which is where the rest of the story stays – the anti-terror op is set. Bardan Jusik was introduced in the last story and is starting to really become a part of the larger family of Skirata – which is what he refers to both squads and his Nulls as. The animosity between Skirata and Vau and the effect that has had on the two squads is explored well here. There’s also the views of the two squads that Skirata tries to fix before it comes to serious blows.

Ordo is one of the six Null ARCs operational in the GAR, and he does what he needs to help Skirata out. He only follows Skirata’s command, and even goes undercover inside the GAR logistics to worm out the ones leaking information – and as such is introduced to Besany Wennen, a striking woman who he immediately suspects.

Etain is glad to be back with Darman, and the bond between the two of them deepens as they reach the understanding that the feelings they have for each other are mutual. Fi is happy for the two – as are the others of the squad – but at the same time is really starting to question things. All the clones are. They are coming to understand the differences between themselves and ordinary people and coming to resent their lot in life. But Fi most of all.

As for the mission itself, emotions are raw, distrust is everywhere, and things aren’t going to plan. They’re rooting out the enemy fast, but also having to deal with complications that keep arising. Everything is dealt with in a way that shows the realities of what this black ops team are doing, and their feelings on the various matters read great. The characteristics of individuals are really starting to come out, and now that everyone is together – including an appearance from Null ARC Mereel, the interactions between the varying parties really show.

The end is quick and final, with the tone of do or die set. Everyone gets to play their part, and any grudges are put aside to deal the blow to the enemy. Once the fight is over, the aftermath plays out fine. There’s hints as to the next story, and this one ends with the two squads ready to split while Skirata and the Nulls are ready to act on the hunt.

Out of all the series, this is the one that really starts to set things in motion. All the key players are introduced here and the motivations that play out throughout the rest of the series have their start here. The setting is also an interesting one, with Coruscant being explored at a more civilian level to really set the differences between the wider world and the close-knit clone community into stark contrast. This one is another great read that is highly recommended.