The earliest memories I have with the Sonic the Hedgehog franchise are with Sonic Adventure 2 way back in 2002. I can also remember owning both Sonic 3D Blast and Sonic R on PC, though of course not having a computer until around 2004/5 those two would have come around that time. I also had Sonic Heroes and Sonic Advance 1 and 2, but I couldn't exactly be called the biggest fan like I was with Pokémon. In that period of 2005-2010, when my gaming passion grew, I had owned hardly any new Sonic the Hedgehog games. The only game I did own was the first Mario and Sonic at the Olympics, on both DS and Wii. The 10th anniversary of Sonic was what first got me into the series. The 20th anniversary helped cement my love for it. I started to take more notice. I followed Generations almost all the way through - from reveal to launch. Fact of the matter is, Sonic Generations got me to love the series, and I have since played most of the games I missed out on. Sonic Generations was a great game, even if short, but it felt restrictive in some ways for someone who had only played Adventure 2 and Heroes. Lost World I felt would fix that, but again - good game, but in some ways restrictive. Sonic Boom's games tried a Sonic Heroes approach, but left most most of the speed out and the team mechanic felt more forced. That's where we get to this year. A new game has been teased massively, though not revealed yet. Speculation is in full force, and of course I've got some ideas. Sonic Boom's TV Series has recently finished its first season run and is well on the way to getting a second season out there. It had some good episodes and some bad, but most were average. If a second season did come to light, I wouldn't mind those average episodes if there were less bad ones. SEGA's partners keep bringing out great toys and apparel, so I wouldn't think of adding anything to that. I'm not so strong on the merchandise, and I think that follows for anything. However, that also follows for TV and film in terms of Sonic. 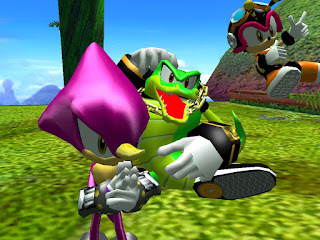 One of the things I feel Sonic games have lost over the years is the multiplayer. They still have it in some games [Colours and Lost World, as well as the 3DS handheld games having online of sorts], but it's never been as great as back during the 2001-2006 period. Sonic Adventure 2: Battle had a lot of stages. All of those from the story missions [barring last story], as well as two extra with twists. It also ulitlised the Chao Garden into its multiplayer, and made a kart racing game a part of that. Sonic Heroes featured numerous multiplayer modes as well, and while some weren't as good as others along with only having three stages per mode, there was still fun to be had. Even Sonic 06, as bad as that game was, featured an interesting co-op mode - even if it was poorly executed in areas. In Sonic Colours, the multiplayer was less competitive and more co-op, acting more like a story mode for two players. All the levels are exclusive to the multiplayer, but had the issue of sharing screens - something which never works in a game like Sonic. Lost World went back for the competitive part of multiplayer, but segmented the levels into sections to allow for a more fair play. The main thing though, with these newer multiplayer experiences, was that each person had the same abilities. Same speed, same attacks, same everything. That might allow skill to win out, but while you do want some competition, you don't want it to rule over everything. And skill can still win out even with different move sets.
While I wouldn't want multiplayer to rule over everything in the next game, something extra than what we have been getting would certainly be nice. Considering the solo Sonic games of recent times, and it still being unsure whether new playables will be included [I would like that if it made sense for the game], including them for only the multiplayer would be a good way to suit both parties. Those who want other characters to return, and those who are fine with the solo Sonic outings. Of course, to fully conform to those who want other characters, at least some of them would need to appear in the story as well. As said though, they'd need to make sense in the story. That can be done by writing situations in which these characters appear, something which those in charge of the story still seem hesitant on doing. 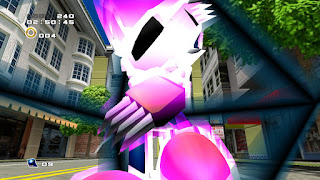 Even for the single player game, if you include other characters outside of Sonic, you want them to have their own abilities, but not go veering off into unknown styles. Metal Sonic is as fast as Sonic, using jets to replicate how Sonic moves and shields to protect itself. Espio, being a ninja, can turn invisible and attack with shuriken. Tails can fly, Knuckles can glide and climb, and Silver has his psychokinetic powers. Those abilities can fit into levels, whether having levels that each character own with their abilities or levels which numerous characters can play in their own way. There needs to be a set amount of characters to play as in single player. Too many can just dull the experience - especially if it feels like they are there just because. Six has always felt the safe number. Then there are the levels themselves, which still manage to carry that sense of character. Emerald Coast and Seaside Hill are both seaside levels, but both manage to be different from the other. Unleashed did a great job at this, making each city feel very different from another. Apatos was mostly white and blues, while Spagonia was mostly orange roofs and grey floor and buildings.
For me, I'd have a story which starts in two places with two teams that then merge to one. Allowing some characters access to the same levels, but not necessarily the same parts of the levels. There would be twenty-seven levels total, with a minimum of two characters allowed access to any one stage. You might be seeing a certain tie with Sonic Adventure 1 here, and it's true. But I feel that mixing of characters in stages does work. You can see different parts of the stages without repeating the stage too many times. If it fits the story, it should be done. The two teams would be following the deeds of Eggman in their own way, picking up leads and working their way to his base. The two teams come across each other and a competition starts between the two. Near the base, the two meet again and get attacked. They agree to work together for this final stretch. Reaching Eggman, they work together to take him down. With the recent solo Sonic games, the teamwork and friendship have still been a part of the plot. With just Sonic to play as, it doesn't feel like teamwork is as important in the game itself when you only see one character running along.

For the Sonic Boom TV Series - as I said - I want the number of bad episodes reduced. Now I know that bad episodes and good episodes are subjective, so I'm not going to say which ones I feel are bad. The fact is though that everyone will have at least one episode they felt wasn't as good as the rest. A lot of others have been saying what they would like from the series. Aside from multi-part episodes, there isn't much I would like, apart from the fact they keep up the work they have done and improve upon it even more.
Now, the movie is coming soon. We have been told that numerous times. Not a hint at what it will actually contain has been given though. All we know is that will be live action with CGI - in the same way Garfield or Yogi Bear have had films like that. The only thing I can say for this is that I'd want a similar feel to Unleashed. The scope in that game was great, and it had well choreographed scenes. While the plot of the middle wondered off a bit, the beginning and end was great. If the plot of the film can be great, and keep the scope of Unleashed, I will be pleased.

I won't be covering merchandise, as I have said that while I look at what's on offer, I've never really been interested in any of the Sonic merch. So next week will be the last look at one of my core franchises. It's the one I've known the least yet have felt the most. Star Wars will be next week, and it will probably be the longest one yet.
Posted by Christopher Searle at 22:32
Email ThisBlogThis!Share to TwitterShare to FacebookShare to Pinterest
Labels: Core Franchises, personal, Sonic the Hedgehog
Newer Post Older Post Home